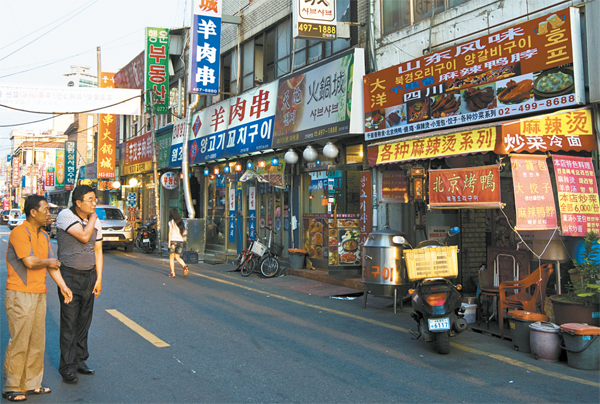 “The main reason I chose to live here instead of in a neighborhood near SNU is food,” she said. “There are many restaurants and grocery stores around Konkuk University that cater to foreign students.”

In particular, a 700-meter (0.4-mile) avenue near exit 5 of Konkuk University Station is filled with restaurants run by Chinese immigrants specializing in their native cuisine, including the famous lamb skewers.

It was about 10 years ago when ethnic Koreans from China who had worked in sewing factories in Gwangjin District began to open restaurants around Konkuk University. Since then, the avenue near exit No. 5 has emerged as a new Chinatown in the middle of Seoul.

“I was wondering about this place as I heard many Chinese people lived here and that there were many Chinese restaurants. So I came here to see what it is like,” said a tourist from China named Jaio Cheng.

There are some differences to be found compared to Incheon’s Chinatown, which is the first of its kind. While the neighborhood in Seoul is new, the ethnic enclave in Incheon was founded following the opening of the port there in 1883. In Incheon, there is a variety of restaurants, while those in Gwangjin District mostly specialize in lamb skewers.

“I come about three times a week to enjoy skewers here, which taste just the same as those in China,” Li said.

The newfound popularity has been a boon for the economy.

“We hope Gwangjin District can appeal to many potential tourists with its exotic atmosphere just like Incheon’s Chinatown.”