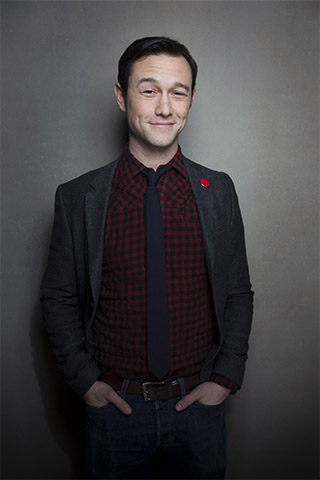 Joseph Gordon-Levitt is attending his sixth Sundance Film Festival, this time as the writer and star of his directorial debut and host of the festival’s closing awards ceremony.

The 31-year-old premiered “Don Jon’s Addiction” Friday at the independent film showcase. He plays the title character, a man who prefers pornography to real sex, even though he brings home a different woman every weekend. Scarlett Johansson, Tony Danza and Julianne Moore also star in the movie.

“I wanted to tell a love story, and in my observations, what gets in the way of love oftentimes is the way the people objectify each other,’’ Gordon-Levitt said in an interview Saturday. “The story centers on a relationship between a boy and a girl, and the boy watches too much pornography, and the girl watches too many romantic Hollywood movies, and they’re both sort of objectifying each other.’’

He brought the film to Sundance because of its community of artists who love storytelling.

“It’s a community that reassures each other that there’s more to movies than glitz and glamor and box office,’’ he said. “And look, that stuff’s all fine. But stories predate Hollywood. Stories predate the English language, and the reason that I love working in movies is because I love stories .?.?. and I love being a part of this community here at Sundance that embraces that more than some of the other things that tend to take prominence in other parts of the movie industry.’’

He said his film “would never get made within the studio system, but it’s a mainstream comedy.’’ AP