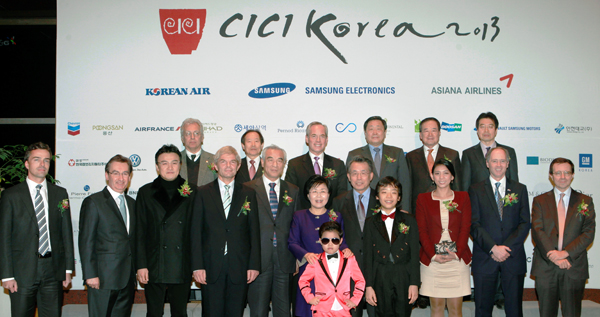 Choi Jung-hwa, president of the Corea Image Communication Institute, center, at the Korea Image Award Jan. 15 in the Grand Ballroom of the Grand Intercontinental Hotel in Samseong-dong, southern Seoul. By Park Sang-moon


Psy will have to start taking notes on what awards he has received so far for his hit song “Gangnam Style” after the “Korea Image Stepping Stone Award” was given to the Korean rapper last week by the Corea Image Communication Institute (CICI) during its “Korea Image Award 2013” held at the Grand Intercontinental Hotel in Samseong-dong, southern Seoul.

CICI, which marks its 10th anniversary this year, was established to bring together experts to brainstorm new and innovative methods to promote Korea.

Psy certainly fits that bill. The 35-year-old rapper Psy galloped to international stardom in an instant, breaking world records, winning numerous awards - and having a global hit with a song in Korean with only has a few words of English in it: “Style” and “hey, sexy lady.”

Seoul’s toniest neighborhoods are now as well known, by name at least, as Beverly Hills.

Acknowledging Psy’s contribution to expanding interest in Korean culture beyond the Asian region to all corners of the world, Choi Jung-wha, 58, the president of the CICI, awarded Psy with the “Korea Image Stepping Stone Award” in a pre-recorded video clip that was played during the award ceremony on Jan. 15.

“Korea, once known as the Hermit Kingdom, has become a creative and dynamic country,” said Choi, during a welcome speech at the ceremony in front of some 800 guests, including Culture Minister Choe Kwang-shik, former Prime Minister Han Seung-soo and leaders from the diplomatic and business community. “The appearance of new leaders in the world’s leading countries and the development of new technology brought about significant changes in people’s lifestyle. Above all, the biggest change was that Korean pop culture has spread across the world.

“I am very proud that Korea has become a leading country in the cultural field,” she continued, “promoting both its traditional and modern culture.”

Psy was surely the hero of the Korean culture in 2012 and although he wasn’t present at the ceremony, he was represented by his very own “Mini-Me,” seven-year-old actor and dancer Hwang Min-woo, who attended the ceremony in a bright orange suit and flashy sunglasses.

Meanwhile, YouTube was awarded the “Korea Image Stepping Stone Bridge Award” for acting as a bridge connecting Korean culture with other parts of the world. Anthony Zameczkowski, head of Music Partnerships, YouTube APAC, accepted the award on behalf of the company.

CICI president Choi is a veteran interpreter and translator and a professor of interpretation and translation at Hankuk University of Foreign Studies. In an interview with the JoongAng Ilbo last week, Choi said she decided to establish the institute 10 years ago after being asked the most simple of questions: “Are you Korean?”

“While I was on a business trip to Indonesia in 2002, an Indonesian official asked me if I was Korean,” said Choi.

“I traveled to more than 60 countries around the world and it was the first time for me to receive such a question. Everyone asked if I was Chinese, Japanese, Vietnamese. No one had ever asked me if I was a Korean. I was so touched. I was determined from then on that I should roll up my sleeves to promote Korea to the world.”

The following year, she established the CICI and went right to work by doing surveys on the image of Korea to foreigners. In 2010, when Seoul held the G-20 summit, the institute held its own C-20 summit and invited delegates of the member countries of the G-20 to experience traditional and modern Korean performances and meals.

“According to the survey we did, many foreigners thought of words like ‘divided country,’ and ‘Korean War’ when thinking about Korea until 2011. But last year, foreigners mentioned conglomerate such as Samsung and LG as well as K-pop and Korean dramas,” said Choi.

During last week’s award ceremony, CICI revealed the results of last year’s survey, in which it asked 502 foreigners and locals the most representative image of Korea.

More than 70 percent of the respondents said they came to better know Korea through Psy.