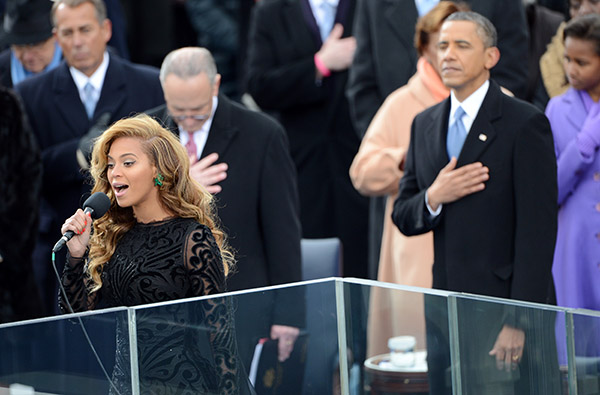 WASHINGTON - Beyonce drew a loud cheer at the inauguration Monday even before her impressive rendition of the national anthem. But in the role she played four years ago singing for the president and first lady as they danced at the inaugural ball was her “Dreamgirls’’ co-star Jennifer Hudson.

If President Barack Obama’s first inaugural theme seemed to be summed up by Beyonce’s “At Last,’’ this time it was Hudson’s version of Al Green’s “Let’s Stay Together.’’ Obama crooned a few bars of the same soul song a year ago at a fund-raiser at Harlem’s famed Apollo Theater.

Hudson was among the entertainment at Monday night’s inaugural balls, joined by Stevie Wonder and Alicia Keys, who modified her hit “Girl on Fire’’ to sing, “He’s the president and he’s on fire. .?.?. Obama’s on fire. Obama’s on fire.’’

The crowd at the official Inaugural Ball joined in with the Grammy-nominated fun.’s anthem “We Are Young.”

Earlier in the day, the applause for Beyonce started when she took her place with Jay-Z at the Capitol to watch Obama take the oath for his second term in office. The two stopped to chat with the Rev. Al Sharpton.

James Taylor kicked off the musical performances, strumming his guitar and singing “America the Beautiful.’’ Kelly Clarkson followed with a different arrangement of “My Country ’Tis of Thee.’’ Then Beyonce was introduced and the crowd again roared its approval.

Beyonce had a definite fan in Supreme Court Justice Clarence Thomas, who applauded eagerly after she finished singing the national anthem. She offered R&B-esque vocal riffs as she sang on, and the crowd seemed to love it, cheering loudly as she finished. Clarkson, too, hit some high notes.

Beyonce may have been the star musical attraction, but she had plenty of company from Hollywood at the Capitol on Monday. Katy Perry and John Mayer sat side-by-side, with Perry in an orange-striped coat and wide hat and Mayer in dark sunglasses.