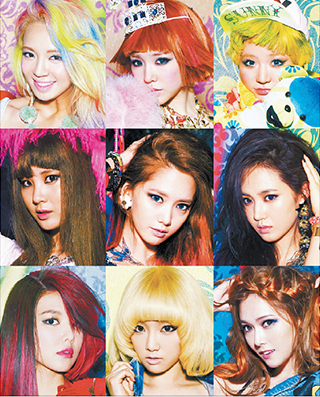 Every new year is always special, but 2013 must be especially so for K-pop fans across the world because Girls’ Generation returned to the music scene on Jan. 1.

The girls released their fourth album, “I Got a Boy,” 14 months after the release of their third album.

Girls’ Generation’s fourth album, “I Got a Boy,” represents a new direction and a different look for the iconic K-pop group. Provided by SM Entertainment

It was a much-anticipated comeback, but the early release of the title track of the same name has drawn mixed reviews. Girls’ Generation wasn’t what the public expected. They returned as hip-hop girls.

The title track is not an easy song with hooks and repetitive lyrics. The nine-member girl group also gave up on little girly and frilly dresses.

Instead, the girls come armed with fierce rap and high-top sneakers. They freely rap and dance on the stage.

Some harshly criticize it as way too out of character for the group, while others think such experimentation will help take K-pop to the next level.

In fact, Girls’ Generation has been away from the pop scene for 14 months in a business where stars and songs rise and fade in a matter of a few months. And they must be under a lot of pressure to show a new side of themselves through the new album.

Girls’ Generation seems to have it all. After years of training, they quickly became a household name after their debut back in 2007. The nation’s music market was way too small. The girls went to Japan in 2010 and they made it big. It didn’t take that long for Girls’ Generation to reap success worldwide.

When an artist peaks, the public wants to see more than that and the fourth album of Girls’ Generation is probably the product of months of efforts.

Ilgan Sports, JoongAng Ilbo’s sports and entertainment daily, recently caught up with the girls and bombarded them with questions about the album and their future plans.

Q. This is your first album in 14 months. How do you feel?

A. Taeyeon: It’s been a while since all of us performed together. Thus, we all try to enjoy ourselves while singing and performing on the stage. We’ve been trying hard to show new sides of ourselves with this new title track.

What differentiates this album from your previous one?

Yuri: I would say this one is very unpredictable. We’ve been singing catchy and easy-to-follow songs, but we wanted to go beyond expectations of the public this time. Some like this album and some don’t, but we can’t make everyone happy because people all have different tastes. Although it takes time for the public to understand the title track as all of us talk about different things, I’m happy with it. I approached the song as rambling chats of young ladies.

Some support your challenge, but some don’t.

Seohyun: I totally understand people who love it and hate it because we all felt the same. It was hard to figure out the song in the beginning. Some of us liked it, some didn’t, but I got attached to the song as I listened to it again and again.

Do you usually check reactions from the media after releasing albums?

Tiffany: I searched and read reviews from the foreign media. One of the most impressive reviews from Billboard said, “Girls’ Generation just set the bar truly high for pop in 2013.”

Tell us how you ended up choosing this one as a title track.

Yuri: There were two options, but I felt “I Got a Boy” was made for the title track.

Did the song give you an instant picture of your performance on the stage?

Yoona: The song was very foreign to me and images of musicals came to my mind as I listened to it repeatedly. We tried to add a lot of wit to our performances. That’s one reason I have a lot of fun when doing a stage for this song.

Taeyeon: It requires a lot of energy and we all had to take a break for at least 20 minutes after a round of practice. All my muscles feel tight every time practicing the track without a break. So we once suggested that Hyoyeon should do the toughest part. After many practices, I got to know how to pace myself. The toughest part begins when the second part of the song starts as we throw our caps. We wouldn’t dare to challenge to the choreography if we were not Girls’ Generation. We tried to live up to our name.

Sooyoung: The choreography naturally makes us shed weight. After every performance, I feel like I’m in a gym and my personal trainer demands that I do 15 more pushups when I’m totally out of breath.

Did anyone get hurt or injured while practicing?

Jessica: Some already attached painkiller patches here and there. I think my right arm creaks whenever dancing. Some complain about neck pain because we do head-banging.


Now all of you are no longer rookies, with a six-year career.

Seohyun: They have been hectic years for all of us and I didn’t even know six years had passed. I feel like I’m born again every new year. I sometimes ask myself, ‘Who am I?’ because it’s really hard to think about myself. But I would say I’ve been happy all in all.

Some expect to see more mature sides of you. Do you feel burdened by that?

Yuri: No. It’s not like ‘we have to be different,’ but it’s more like ‘we’re different.’ We take pride in our own personality as a girl group. As we chose “I Got a Boy,” which is a hard choice, all of us became tighter than ever before.

If you had to pinpoint the hardest time during you career, what would it be?

Tiffany: It was four years ago when the release of a regular album was postponed because of copyright issues. It was around the time when girl groups poured onto the music scene. I thought we could strengthen our position with the album, but the entire project was canceled and we felt lost. We were all young and it was a huge blow for us.

Sooyoung: There are always difficult moments. It’s like walking on thin ice. But the thing is we are able to solve our own problems within Girls’ Generation. We’ve seen each other between nine and 13 years and these girls are part of my family now.

Sunye, a member of Wonder Girls, is going to get married. It was even unthinkable for members of girl groups years ago to say publicly that they were in romantic relationships.

Taeyeon: As long as he is an eligible spouse, anyone of us can get married. I would support the decision if one of us wants to settle down. But we will scrutinize him first.

Yuri: I think we don’t look easy for male celebrities, I guess. There are many girl group members who openly say in talk shows that they were asked out by boy groups. I really want to know how it works for them. Even if I go a few blocks away from my house, people take my photos and upload them on a real time basis. To be honest, I don’t even know where to go and what to do.


It sounds like you don’t even know how to loosen up yourselves.

Tiffany: We try to have fun by eating out and playing games together. Sometimes we play Anipang until 4 a.m.

Do you often drink alcohol?

Hyoyeon: We really drink a lot. (laughs) Instead, we drink inside the home where we used to live together. We often do a PJ party, drinking beer and champagne. Tiffany is the best and Sunny even drinks kaoliang liquor [sorghum wine].


You recently gave your top Hallyu star title to Psy.

Jessica: I think he paved a way for many other Korean singers and I really appreciate him in that way. Another great achievement of his is that “Gangnam Style” has become the most popular Korean song. I sometimes wonder how he’s doing because of his deadly schedule.

Some say girl groups and boy groups are facing a crisis because the public has become bored with cookie-cutter music.

Yuri: It is true that we have so many girl and boy groups in the music scene. Because there are so many, it’s hard to find out their character. I hope to go back to the time when Kim Gun-mo began a music show with his ballad song and Tae Ji-na wrapped up the show with his trot song. I hope to see diverse genres of music loved by the public.

- Appeared on “Late Show with David Letterman” and “Live! with Kelly” in February 2012, singing English version of “The Boys”