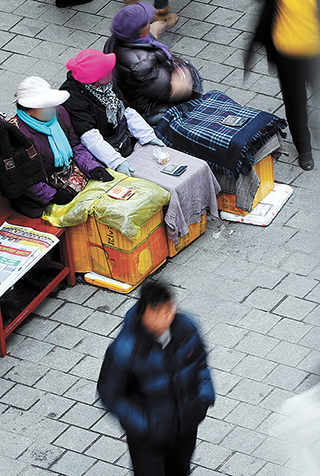 Private traders who deal in the FX market wait for customers at Namdaemun market in central Seoul yesterday. As major currencies including the U.S. dollar and Japanese yen depreciate, foreign exchange traders say they are making losses. [YONHAP]

Trading on Japanese yen futures spiked in Korea this year as more investors made bets on the further descent of the Japanese currency, data showed yesterday.


The surge is considered unprecedented in the local market, because investors have usually only made bets when the yen strengthened.
The daily turnover of yen futures reached an average of 104.9 billion won ($98.7 million) in the Seoul market from Jan. 1 to Friday, up 84.9 percent from the average 56.7 billion won tallied over the same period in 2012, according to the data by the Korea Exchange (KRX).

A foreign exchange futures contract refers to buying or selling a specified amount of a given currency at a predetermined price on a set date in the future. It is a common hedging tool used by companies to avoid risks in cross-rate transactions.

In the past investors mostly bet on the yen’s rise, as the currency is considered a safer asset. But it seems like the fast depreciation of the yen against other global currencies in recent weeks has triggered the spike in futures betting.

According to market observers, the surge in yen futures trading came as investors became more certain that the currency will continue the weakening streak for some time, largely due to the pledge for monetary easing to fuel growth by its new government, headed by Japanese Prime Minister Shinzo Abe.

Abe recently signed a fresh stimulus measure worth 20 trillion yen to overcome the chronic deflation the country has been facing for decades. 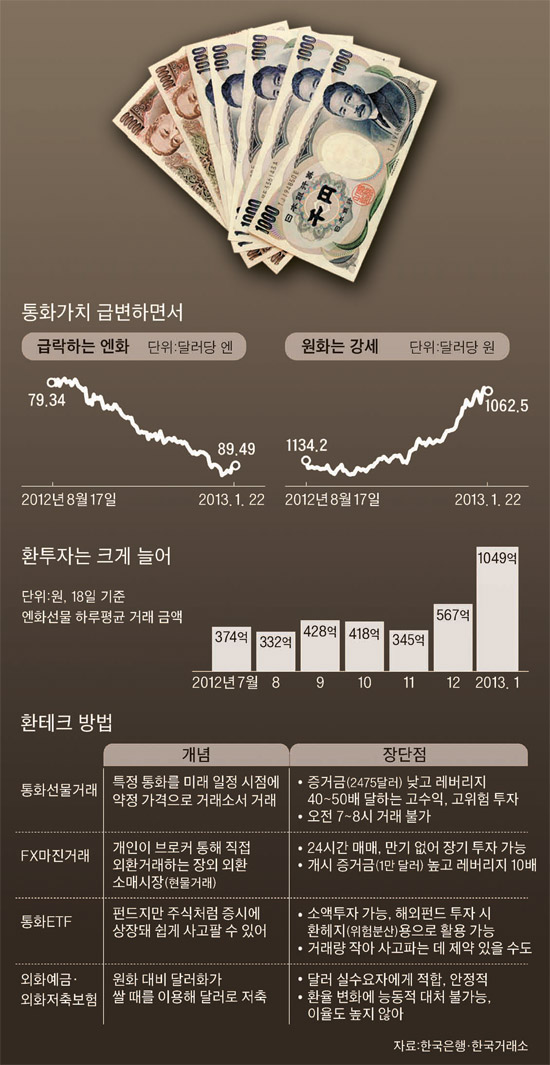 The cross-rate between the yen and U.S. dollar breached the 90-yen mark on Friday, for the first time since June 2010.

The Bank of Japan said yesterday it will strive to meet the 2-percent inflation target “as soon as possible.” The BOJ initially set a plan to reach the target by mid-year, but yesterday’s announcement suggests that the Japanese central bank is taking inflation more seriously.

The BOJ also said it will push for open-ended asset purchases from 2014 as part of an aggressive approach to fuel growth.

In the Seoul market, the Korean won closed at 89.22 won per 100 yen, down 0.27 won from Monday’s close. Finance Minister Bahk Jae-wan pledged to increase support for small businesses to help minimize their losses stemming from the weakening yen at a crisis management meeting yesterday in the capital.

Bahk said the government will step up its policy measures to protect companies from foreign exchange risks.

“Industries that are dependent on price competitiveness are likely to be affected overseas,” Bahk said. “Small exporters are more likely to suffer management difficulties as they face aggravating foreign exchange risks.”

It was the first time the minister has actually mentioned the weak yen phenomenon. Despite calls for government measures from various industries, the government has remained taciturn on the issue.

According to the finance ministry, the Korean won appreciated faster than any other currency since the Abe government was installed. The won has so far risen by around 20 percent against the yen.

The ministry estimates that the average break-even point for small businesses when they trade with Japanese companies is 1,343 won per 100 yen.

As part of the efforts, the Exim-Import Bank of Korea will earmark 45 percent of its 50 trillion won budget for loans for small businesses.

The Small & Medium Business Corporation will extend loan maturities for businesses suffering due to the weaker yen.

And the Korea Trade Insurance Corporation will temporarily lower premiums for insuring against currency risks.

The Ministry of Knowledge Economy, the Financial Services Commission and the Small and Medium Business Administration will provide consultations for businesses hit by the changing exchange rates.

“Although the government can’t change its principal foreign exchange policy, it can increase support for industries as a weaker yen is expected to affect local businesses for a long time,” said a government official at the finance ministry.