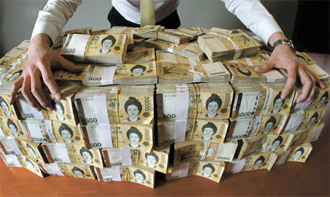 Depositors have been rushing to local banks to withdraw their savings to avoid a tax bomb, the Financial Supervisory Service (FSS) said yesterday.

After the government revised the tax law last year to generate more revenue from individuals by lowering the threshold on taxable income from 40 million won ($37,600) a year to 20 million won, nearly 12 trillion won of time deposits at banks were withdrawn from October to December.

According to the revision, which was drafted by the incumbent Lee Myung-bak administration and later agreed by ruling and opposition parties at the National Assembly, investment profits in excess of 20 million won are categorized as both taxable and regular income starting this year.

“As interest rates remain on a downward curve and in light of the government’s announcements about the expansion of taxable profits earned from financial investments in the fourth quarter, depositors withdrew a combined 11.7 trillion won of time deposits upon maturity,” said Lee Ki-youn, deputy governor of the FSS’s banking and no-banking supervision.

“It seems as though depositors moved their money to short-term instruments like money market deposit accounts, where they can freely make withdrawals and deposits at any time, as these saw a quarterly increase of 12.6 trillion won in Q4.”

The financial watchdog said depositors switched over to different financial instruments before the comprehensive financial income tax rate took effect on Jan. 1. as they want to wait for a more opportune time to invest.

Due to the global economic slowdown and slow pace of growth in the domestic economy, the delinquency ratios of corporate loans edged up 0.08 percentage point to 1.18 percent in 2012.

Meanwhile, the FSS said banks will set a higher target for SME loan growth this year of 6.7 percent, up from 6.5 percent in 2012, to address the funding difficulties of SMEs.

The FSS said it will encourage banks to strengthen their financial support for SMEs that are seen to possess superior technology and growth potential, so these can serve as future growth engines.

“Banks will be directed to enhance their ability to absorb losses by cleaning up delinquent loans and strengthening the requirements for loan-loss provisions,” Lee said.