No cold shoulder for the NHL from Toronto fans

No cold shoulder for the NHL from Toronto fans 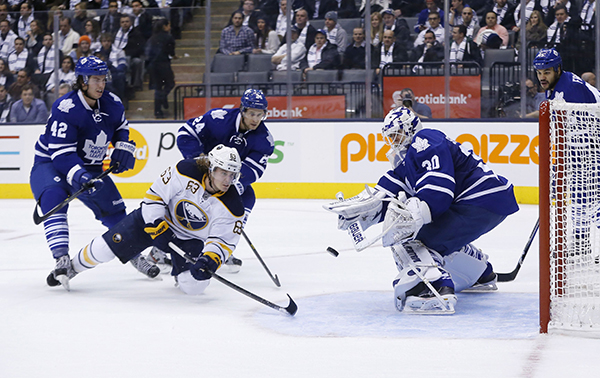 Tyler Ennis (63) of the Buffalo Sabres goes to the net against the Toronto Maple Leafs’ Ben Scrivens (30), John-Michael Liles (24) and Tyler Bozak (42) during the third period of their game Monday in Toronto. The Sabres won 2-1. [REUTERS/YONHAP]

TORONTO - It may have been Blue Monday, the day identified as the most depressing of the year, but in hockey-mad Toronto it was party time as the Maple Leafs played their first home game after a bitter lockout.

With Christmas bills coming in and New Year’s resolutions going out the window, Welsh researcher Dr Cliff Arnall calculated that Jan. 21 marked the low point of the calendar for many people.

Hockey fans in Toronto seemed oblivious to the doom and gloom, however, and the jolt of euphoria from the return of the NHL to its biggest market was not even dampened by a 2-1 loss to the Buffalo Sabres.

“I thought the fans were very energetic, they were loud even on a night where we didn’t provide a lot of offense,” said Toronto coach Randy Carlyle. “If you see the work ethic, like Colton Orr steps up and takes on a very, very large man, those are the kind of things you are going to need.

Along with quitting smoking, going on a diet and working out, one of the most popular New Year’s resolutions among disgruntled NHL fans was they would make greedy owners and players pay for dragging them through a 113-day labor dispute.

But on a biting cold winter night in Toronto, all seemed forgiven as Leafs fans were quick to open their wallets.

Even with some of the NHL’s steepest ticket prices, the Maple Leafs have sold out every game since moving to the Air Canada Centre in 1997.

The first NHL team to be valued at $1 billion, according to Forbes, the Maple Leafs’ performance on the ice has not been as spectacular, having missed the playoffs for the past seven years and not hoisting a Stanley Cup in almost half a century.

The lockout appears to have caused little damage to the Maple Leaf brand, which remains as popular as ever.

Toronto’s 2-1 season opening win against the Canadiens in Montreal on Saturday drew a regular season record audience on CBC, while happy scalpers were back doing a brisk business and diehard fans lined up all night in Arctic conditions for a chance to land a free ticket to Monday’s home opener.

The opening night pregame festivities were out of this world, as Canadian astronaut Chris Hadfield, with the help of technical wizardry, conducted the ceremonial opening faceoff from the international space station.

But it was back to earth with a bump for long-suffering Leafs fans as the Sabres jumped out to a 2-0 lead on goals from Cody Hodgson and Jason Pominville.

Nazem Kadri brought the arena to life with a late power play goal, but could not put another puck past Buffalo netminder Ryan Miller, who handled 35 shots. Reuters