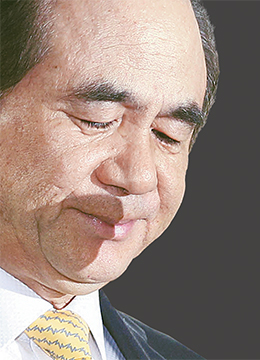 The atmosphere at Woongjin Group’s headquarters in central Seoul was unusually tense last Friday morning as founder Yoon Seok-keum made a surprise appearance. He went to his office, bypassed a meeting of around a dozen CEOs of group affiliates without a word of greeting, then left.

“After filing for a court restructuring program in September, [Yoon] visited his office several times, but he never talked about corporate management,” said an executive at the group.

Last Wednesday, Woongjin’s creditors and management capped a protracted set of negotiations by agreeing to put Woongjin Chemical, Woongjin Foods and Woongjin Passone - three affiliates of the medium-sized conglomerate - up for sale.

The group had already sold off Woongjin Coway, the nation’s No. 1 MBK Partners, a private equity fund manager.

The decision, agreed by creditors and Woongjin executives, left Yoon, the 68-year-old entrepreneur, a handful of publishing affiliates including Woongjin Think Big, which makes study aid books and served as the embryo that led to the birth of the nation’s 31st conglomerate.

Yoon, who returned to his home in Itaewon at 9 p.m. of Jan. 16, bumped into a JoongAng Ilbo reporter on the way who was hoping to hear his thoughts on the group’s latest business dealings.

Woongjin insiders say Yoon, who looked somewhat emaciated, climbs Mount Namsan with wife every morning and plays baduk, or a game of Go, in the afternoons.

When asked if he feels like he’s returning to the group’s early days by refocusing on Woongjin Think Big, Yoon said, “Let’s talk about that in February or March.”

Sources close to Yoon said he has gotten over the shock of Woongjin entering court receivership and is now preparing for how the group will reinvent itself to prosper.

“As though he’s repeating a magic spell, Yoon keeps saying he can start again as the boss of a small company if that’s what he has to,” said a close aide, implying that the founder is interested in returning to manage Woongjin.

Yoon also managed to restore his reputation after creditors and a local court recently cleared him of suspicion of trying to manipulate legal loopholes in corporate restructuring regulations to maintain managerial control of the group’s two affiliates.

He was peppered with criticism and labeled greedy after it was disclosed that he listed himself as a co-CEO of Woongjin Holdings immediately before the holding company and its construction arm, Kukdong Engineering & Construction, filed for a court receivership program in September.

The law regarding bankruptcy and restructuring says a court should appoint the CEO of a debt-ridden company as a court-appointed manager.

“Yoon prides himself on his transparent management,” said a long-time friend. “Although he got tarred by the brush of suspicion, at least he restored his pride.”

Creditors have officially asked him to spend his own money to support Woongjin Think Big on Monday and he reportedly agreed. It is unclear how much he will contribute.

Yoon is held in high regard among many salaried workers in Korea as he established a small publishing company called Haein International (since renamed as Woongjin Think Big) using seed money of just 70 million won and managed to grow it into the nation’s 31st largest conglomerate. Woongjin is believed to the only conglomerate to grow so big among start-ups founded in the 1980s.

It collapsed after seeking to expand too aggressively in various sectors, including construction, solar energy and finance, pundits say.

“Yoon is a heroic entrepreneur,” said Junn Sung-chull, CEO of the Institute of Global Management. “Now our society needs to foster a culture of helping [struggling] entrepreneurs rise again.”

The bankruptcy division of the Seoul Central District Court is expected to decide whether to approve the group’s restructuring plan on Feb. 20.