Provoking some soul-searching to help rebuild the DUP’s DNA

Provoking some soul-searching to help rebuild the DUP’s DNA 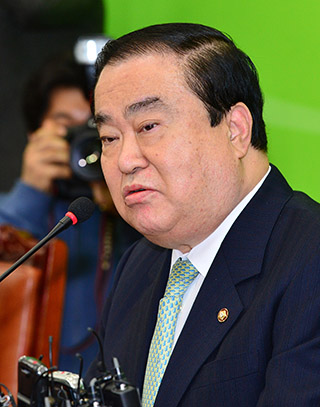 Moon Hee-sang, Chairman of the emergency leadership of the DUP

Moon Hee-sang, chairman of the emergency leadership of the Democratic United Party, said he will hold a referendum at the upcoming party convention to ask members and the public to define the identity of the largest opposition party and its stances on sensitive issues as well as its North Korea policy.

“We will make a decision on whether the DUP’s direction should be the [current party platform of] audacious progressivism ,or the centrist reform defined by late president Kim Dae-jung,” Moon said.

Following the bitter presidential defeat of its candidate Moon Jae-in on Dec. 19, the DUP leadership stepped down and an emergency council was formed. Moon Hee-sang, a 68-year-old senior advisor of the party, was named the interim chairman on Jan. 9, ending a leadership vacuum of more than 20 days.

Moon sat down with the JoongAng Ilbo for an interview on Jan. 13 in his office at the National Assembly. He was working busily in room 1002 of the Assembly’s Members’ Building, not the party chairman’s office, to recruit outside experts to help reform the DUP. After several hours Moon devoted an hour to the interview, but his phone kept ringing throughout.

In his first meeting with the emergency council as the DUP’s interim head on Jan. 14, Moon said, “I will change everything about the DUP, except its status as an opposition party with a history spanning six decades.” He made it clear that the changes will be comprehensive, ranging from the party’s name and logo to its core values.

Q. The internal conflict over the identity and direction of the DUP is growing worse.

A. After the presidential defeat, many said the party leaned too much to one side. Preparations for the convention go way beyond paving the way for the leadership election. I will create a committee devoted to redefining the party line and platforms within the preparation committee for the convention. The committee members will tour the country and hold debates at city and provincial chapters to redefine our identity and positions. We will talk about what should be our stances on issues involving North Korea, national security or the naval base construction plan on Jeju Island, and those issues will be voted on at the party convention.

More people now seem to believe the Roh Moo-hyun loyalists were responsible for the party’s defeat in the presidential election.

They were. But we should not treat factionalism as if it were a matter of good versus evil. The Roh Moo-hyun loyalists became a powerful faction inside the DUP because the people supported them. How can you explain the support for former presidential candidate Moon Jae-in? Right now, the Roh loyalists are going through a process of self-examination and they are staying quiet, but they can emerge again as a central force as time passes and the party moves to elect its next leaders from within. The pro-Roh faction is here to stay. What’s important is not factionalism, but empirical tradition. It’s about real, actual reform.

During the presidential campaign, Moon and Ahn Cheol-soo made a joint declaration to pursue a new kind of politics. Is this a realistic model?

(Ahn, a software mogul-turned-politician, made a presidential bid as an independent candidate, but later dropped out of the race after he failed to come to terms with Moon on how to merge their bids.)

When I look at the agreement, I could feel that they were politically immature. Democracy is a process of handing over the imperial power of the president to the party and the people, one after another. During the so-called “three Kim era,” political party chairmen not only decided on election nominations, but also on official party appointments. There was even a joke that the chairman decides which dog the party will have as a pet. But what about the situation now? It has changed beyond expectations. But Moon and Ahn tried to reduce the power of the National Assembly. Of course, it is important that power is not overly concentrated within the central party, and that it is shared among local chapters. It is also necessary for lawmakers to give up some of their privileges.

How would you define the spirit of the times heading into 2013?

During the presidency of Kim Young-sam, it was about ending military rule. During the Kim Dae-jung era, it was about peaceful change. The late President Roh talked about common sense, and today, it is trust. When I met with then-Grand National Party Chairwoman Park Geun-hye in 2005, when I was the chairman of the Uri Party, I said no one could rise without first establishing trust. When I met with President Lee Myung-bak after the 2007 election, I said the same thing.

(Moon is known for having close ties with President-elect Park. On numerous occasions, Moon has described Park as a politician who can be trusted.)

Will you meet with the current president-elect?

You were Kim’s senior secretary and Roh’s chief of staff. How do you feel as the emergency chairman of the DUP?

After Kim died, my political life ended. Even Roh is not with us anymore .?.?. The emergency council has many tasks, but there is nothing I can do. The DUP emergency council is not like the mighty emergency council of Park Geun-hye. (Park was named to lead the emergency council of the Grand National Party at the end of 2011 to salvage what was left of the sinking conservative party ahead of the legislative and presidential elections last year.) It is my role to spark debate. And I believe we can find a new road and a new leadership through that process.

*Who is Moon Hee-sang? Moon entered politics in 1980 to support former President Kim Dae-jung. After Kim’s presidential victory in 1997, Moon was appointed the senior Blue House secretary for political affairs. He became famous for giving Kim straightforward and practical advice. In 2002, he helped create the alliance between Roh Moo-hyun and Han Hwa-kap in the presidential primary of the Democratic Party, the predecessor of the DUP, to curb Rhee In-je’s lead. Moon then served as the first chief of staff for Roh’s Blue House; he also served as the chairman of Roh’s Uri Party and the deputy speaker of the National Assembly. He is a five-term lawmaker who currently represents the Uijeongbu A District of Gyeonggi.