Nominee for court grilled on payments for expenses

Nominee for court grilled on payments for expenses 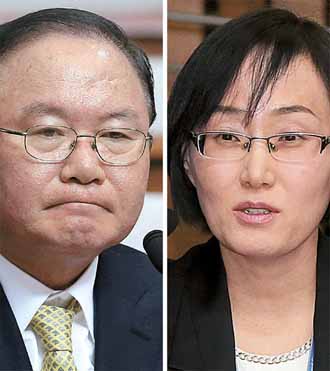 The nominee for chief justice of the Constitutional Court was hammered with questions about whether he pocketed expense money from the court on the second and final day of his confirmation hearings.

Following a rough first day, in which Lee Dong-heub faced questions about his travel expenses, President Lee Myung-bak’s nominee had even a rougher ride when opposition lawmakers accused him of cheating the court out of 320 million won ($300,921) in reimbursements for purely personal expenses.

Park Beom-kye, a Democratic United Party lawmaker, claimed that as a justice at the Constitutional Court for the past six years, Lee received an average of 4 million won every month in the name of “special-purpose expenses.”

According to Park, Lee used the money for personal purposes such as paying credit card bills and insurance fees and supporting his daughter’s life abroad.

“While he spent some money for personal purposes, the balance was still growing and is now estimated to be 270 million won,” Park said.

Under the law, some government officials who are in charge of investigations are reimbursed for up to 300,000 won monthly for “special-purpose expenses” that relate to public affairs. If they spend more than 300,000 won, they have to provide receipts or other records.

The Constitutional Court receives about 1.06 billion won for its special-purpose expenses budget annually from the central government.

On the second day of the confirmation hearings, six people gave statements regarding the allegation. One of them was Kim Hye-yeong, an accountant who worked at the court.

Kim said Lee received the money in cash every month and asked her to deposit it into his personal account.

When asked if she thought it is inappropriate to deposit state money into Lee’s private account, she responded that she did.

“It is wrong to put state money in a personal account because once it goes to a private account, it is mixed with private money,” Park said.

Kim was asked if she knew it was a violation of regulations to give a justice more than 300,000 won without receipts, Kim said, “I was aware that it violated the rules. But I did it.”

To prove the allegations, Park and other opposition lawmakers showed duplicates of two bank statements that Lee submitted Monday. Lee said he had nothing to fear.

“He put the state’s money into his private account, and you see that his ING insurance fees were withdrawn, so were his BC card bills and others,” said Choi Jae-cheon, another DUP lawmaker, who asked Lee, “Isn’t that embezzlement?”