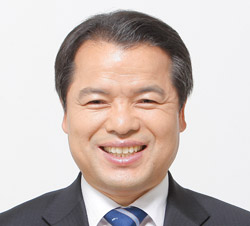 For the first time since its founding 60 years ago, the Korean Bar Association held a direct election system for its president on Monday.

Wui Cheol-hwan, 55, was elected as the 47th president of the Korean Bar Association, breaking the mold of previous presidents as an attorney who practiced outside of Seoul.

In the direct election process Wui beat out three candidates with 2,786 ballots and defeated his main opponent, Kim Hyun, 57, former president of the Seoul Bar Association, by 700 votes. In the preliminary elections on Jan. 14, Kim had been in the lead.

The Korean Bar Association leader previously was elected by the bar’s general assembly. Legal experts state that many provincial attorneys cast their ballots for Wui.

Likewise, Wui is not a Seoul National University law department graduate, like most of previous heads of the bar association.

He grew up in the countryside, running odd jobs like newspaper delivery, and graduated from the Seoul National University of Education.

He spent six years as an elementary school teacher and eventually graduated from the Sungkyunkwan University’s law department.

Wui completed his two years at the mandatory Judicial Research and Training Institute in 1989 and practiced law in Gyeonggi and Gwangju.

The previous president of the Korean Bar Association, Shin Young-moo, was a former judge, founder of Shin & Kim, a leading law firm in the country, and a graduate of the Seoul National University law department.

“In the past, most presidents were graduates of Seoul National University, so there were many instances they did not understand the agonies of lawyers,” said Wui upon election.

“I will open an era of ‘regular lawyers,’ where lawyers are for lawyers.”

In a time with an oversaturated legal market, Wui pledged to better the treatment of the members of the bar and boost job opportunities.

He will serve a two-year term and represent over 12,000 legal professionals nationwide.

“Paralegals, tax accountants, patent agents and other similar legal professions were positions expeditiously created in times when there was a major lack of attorneys of law,” he said.

“Law school tuition is too expensive, so the bridge which enables regular people to enter the legal field has disappeared.”