For surgery, some patients prefer a woman’s touch

For surgery, some patients prefer a woman’s touch 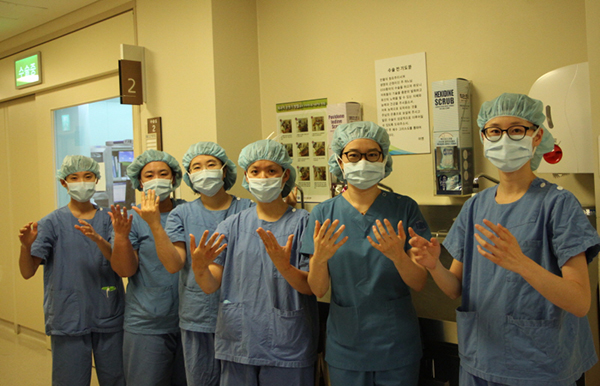 Last Friday, Kim Shin-young, a 33-year-old female pediatric surgeon at Seoul St. Mary’s Hospital, was busy preparing for an operation of a child whose mother had asked Kim to figure out what the little one had eaten for lunch. It was like any other day for the medical professional.

Kim, petite and slim, performs about 10 surgeries every week. Though oftentimes each operation requires Kim to stand continuously for five to six hours, she says there’s no physical burden on her. Once, she was even an assistant surgeon during a complicated surgery that went on for more than 14 hours.

“I moved my residence near the hospital because once you’re a surgeon, you need to rush to the hospital even after work if you receive an emergency call,” Kim said.

For a long time in Korea, the surgical department has long been dominated by male medical professionals, but that trend is now changing, according to various statistics.

Though being a medical surgeon in general requires good physical strength and a strong heart with many operations often involving cutting and sewing up organs, more women are stepping up to take the job.

According to Seoul St. Mary’s Hospital, in 2003, there was only one female surgeon among 13 medical surgeons. Currently, however, six are female of the total 37. Even at the Asan Medical Center, 14 out of 62 surgical doctors are female.

According to the Korean Surgical Society, at present, of the 4,894 confirmed surgical doctors, 9.6 percent, or 469 are female surgeons.

“Considering the rate of female students entering medical departments at universities, the female ratio of surgeons will increase up to 30 percent in the future,” said Professor Park Cho-hyun of St. Mary’s Hospital.

The reason why there are more females entering this field is because their delicate nature in performing operations is being recognized by the society. Also, patients are more at ease with female surgeons than before.

In the United States, one of the virtues of becoming an outstanding surgeon is known to be having a “woman’s hand,” meaning dexterity.

More than a decade ago, few hospitals received female surgeons thinking that patients would feel uncomfortable.

“In the past, patients thought all females they meet in the hospital are nurses,” Professor Park said.

“Today, however, patients tend to be more comfortable with female surgeons because they have the power to handle patients with more subtleness and smoothness.”

One of the biggest challenges, however, for female surgeons is childcare. Shim Jung-ho, a medical surgeon at Seoul St. Mary’s Hospital, had her second child pregnant when she was in her second year of residency.

She had morning sickness and wasn’t able to drink water, but she couldn’t cut down on her working hours.

She said she was only allowed to sit down on a chair during long operations.