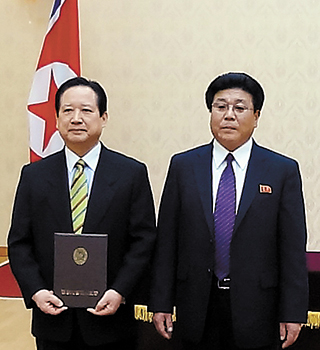 Pyeonghwa Motors President Park Sang-kwon, left, with Cha Hui-rim, Chairman of the Pyongyang City People’s Committee, at the Mansudae Assembly Hall on Dec. 18 after he received the honorary citizenship.

The head of inter-Korean automaker Pyeonghwa Motors said yesterday that he was made an honorary citizen of Pyongyang late last year to reflect his contribution to North Korea’s development.

In an interview with Yonhap News Agency, Park Sang-kwon said he received the citizenship at the Mansudae Assembly Hall in the North Korean capital on Dec. 18.

Park has led the carmaker that started off as a joint venture between South Korea’s Tongil Group, run by the Unification Church, and North Korea. Production began in 2002, with the company producing about 2,000 vehicles every year.

He said his citizenship has a serial number of 002 and has an inscription saying that the honor is being bestowed because of his contribution to the fatherland and the Korean people. He is the first foreign national to have received the honor under the communist country’s new leader Kim Jong-un.

Kim Chin-kyung, the Korean-American president of Pyongyang University of Science and Technology was the first to receive an honorary citizenship in Aug. 2011 by late North Korean leader Kim Jong-il.

He then said that the reason why Tongil decided to turn over management of the carmaker last November was so it could focus on a wholly-owned business operation in the country. Last year, the business group created by late Rev. Moon Sun-myung also agreed to hand over control of the Pothonggang Hotel in Pyongyang.

The executive said he had asked the North to approve such a step. 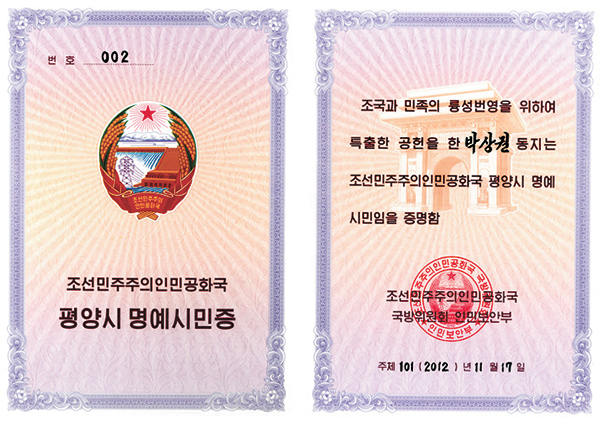 The certificate of honorary citizenship from the North Korean capital city. [YONHAP]

“Pyeonghwa Motors has been generating profit for the past five years,” Park said. The businessman said that in the future, he wants to engage in the distribution of household necessities in North Korea, and in particular to Pyongyang.

He said there is a need to show that a wholly-owned (outside-invested) company that is not tied to a joint venture project with a North Korean partner can succeed in the country, which can act as an incentive for other foreign companies to invest.

He pointed out that Chinese companies that invested in the North are generally those that have not done well at home. He said that successful South Korean, Japanese and U.S. companies need to engage in business activities in the North.

“If 200 competitive South Korean companies operate in the North, there would be no reason for inter-Korean tensions, and it can actually help push forward the unification process,” he said.

Park, meanwhile, said the North is looking into the option of developing a ski resort near the 768-meter high (839-yard) Masik pass near the city of Wonsan on the east coast.

He said that United Front Department of the ruling Workers’ Party of Korea mentioned the development plan in December and claimed that North Korean leader Kim Jong-un gave the order personally. Kim has been running the country since the sudden death of his father Kim Jong-il in December 2011.

“The North seems to want to develop a small ski resort first and build this up depending on demand,” he said.

The businessman added that Pyongyang wanted to transform Wonsan into a special tourist zone and is interested in using a military airfield near the city to accept civilian flights carrying tourists. Wonsan is famous for its beaches and if a ski resort is opened on Masik pass, it could attract tourists year round.

Park claimed Kim Jong-un has gained confidence in managing the country in the last year and may move to increase investments into the tourism sector. Yonhap