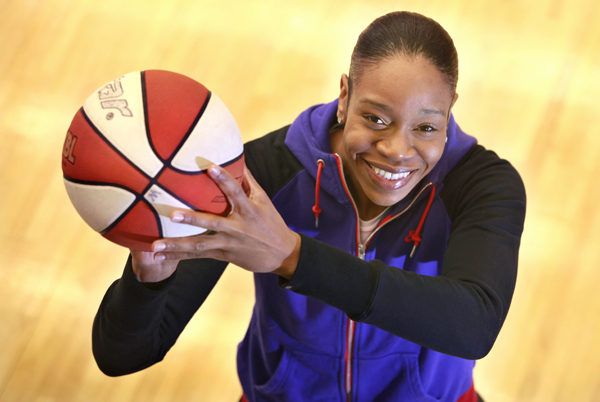 
Korea needs to open up to new challenges and styles if it wants to have a more competitive women’s basketball program, says Tina Thompson.

And the 37-year-old American knows a thing or two about competition: Thompson is the WNBA’s all-time leading scorer.

Thompson played in Korea in 2006-07, but foreign players were banned after the following season. She returned last November after the Women’s Korean Basketball League lifted the ban.

The ban, imposed to protect domestic players, was a factor in allowing the dominance of one team, the Shinhan Bank S-Birds, over the past six years.

That dominance, which had kept already a scant number of local fans away from women’s basketball, ended when the ban was lifted. Woori Bank Hansae, which last year finished at the bottom of the league for the fourth straight time, is in first place with 10 games remaining. Tonight, Hansae plays the second place S-Birds, who are three games back.

At the center of the Hansae turnaround is Thompson.

She leads the league in scoring with 20.4 points per game and is seventh in rebounding at 10.6.

“For a long time, foreign players weren’t playing in the WKBL, so the fact they are kind of playing with each other, very familiar with each other, most of them are friends, you know the challenge there is little different,” she said in an interview Tuesday with Korea JoongAng Daily.

“But when you have someone coming (from outside), when Korean players have to guard American players, it’s very different than when they have to play each other because they know they have to give a little bit more effort, so they change their style.”

Korean women’s basketball was once well respected at international level, winning a silver medal at the 1984 Los Angeles Olympics.

But the game has fallen on hard times of late. The 12-time Asian champions lost to Japan, 79-51, in June, failing to make it to the Olympics for the first time in 20 years. In the FIBA ranking released in August, the Korean team fell two notches to 11th, the first time it failed to make the top 10 since 2001.

Not only the senior level, but the junior program of Korea has also suffered in quality in the face of dwindling interest and a decreasing number of teams at primary and secondary schools. Korea’s team was humiliated by Japan, 102-56, at the U16 Asian Women’s Championship final in China in December 2011.

According to league officials, that sense of crisis for women’s basketball in Korea was one of the reasons for bringing back foreign players. Thompson said it will help raise the bar at the professional, but more efforts are needed to improve the national program as a whole.

Citing China, she said Korea must challenge its best players.

“China has been in the Olympics quite a bit,” she said. “I think they are very open to different styles or different types of players playing there. Even a lot of Chinese players would come (to the U.S.) and they play in the college programs, train or compete against us (WNBA).

“They are kind of introducing themselves to the different styles as well, as they have either American coaches come over and do clinics and training in camps. I am not going to say this kind of thing can turn programs around right away, but I do think it helps them improve.”

The 16-year veteran remembered playing with Jung Sun-min, the first Korean in the WNBA who played for the Seattle Storm in 2003. Since Jung, only one other Korean played in the U.S. league: Ha Eun-joo for the Los Angeles Sparks in 2007.

Thompson, who also played in Russia, Italy and Romania during the offseason of the WNBA sees talent in Korea, and says those players should be encouraged to play overseas to enhance their competitiveness.

“A lot of the girls who play in the Korean league, they don’t think it’s something they can actually do,” Thompson said. “That’s kind of half the battle. You know you have to mentally believe that you are able to do it.”