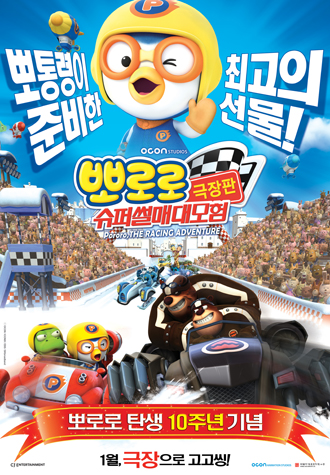 Pororo, a cartoon penguin who commands immense popularity, is set to cement its reputation as one of Korea’s most popular cultural exports as a 3-D film version of the animated sensation opened at home and in China yesterday.

“Pororo: The Racing Adventure” has made its big screen debut at more than 6,000 theaters across China, testifying to its growing commercial appeal among broader audiences.

The size of its debut in China is particularly impressive as foreign productions are usually subject to scrutiny. “Pororo” has even surpassed DreamWorks’ “Kung Fu Panda 2” (2011) in the growing market.

The new film follows Pororo and his friends on an adventure as they leave their village for the first time and trek to the snow world Northpia to win the championship in a snow sledding race.

The cast will include characters that have not been seen in the TV version. The villain brown bear team and last year’s champion white tiger team will appear with many other animal characters in spectacular 3-D.

Pororo and his companions, including Poby the polar bear and Crong the dinosaur, have developed a big following, and fans even call the penguin “Potongryung,” which means President Pororo.

And the popularity doesn’t stop with television or the movie. There are at least 1,000 spin-off products and six theme parks inspired by the animated character.

The huge popularity of the animated family has attracted outside investors looking to cash in. ACG China, a government-affiliated investment group, dedicated approximately 2.2 billion won ($2.06 million), or 30 percent of the entire budget, to making the adventure film, which is the first foreign production given support by the government-affiliated body.

“We came to an agreement to invest considering the successful performance and know-how of production company OCON Animation Studio,” a representative of the investment group was quoted as saying to Max Movie, a film Web site.

“We also acknowledge the 10-year business record of the company as well as its ability to attract investments.


At home, President-elect Park Geun-hye has also taken notice. She made a special visit to a VIP screening event of the movie last week that also celebrated the 10th anniversary of the main character. 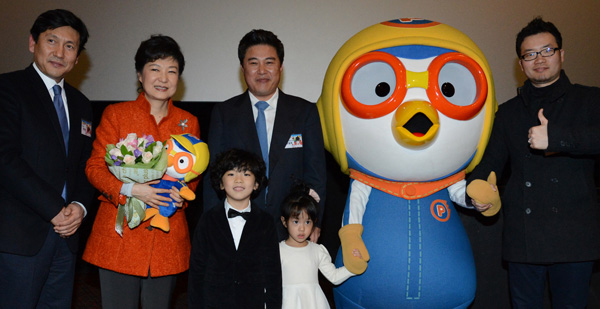 President-elect Park Geun-hye, left, visits a screening event for “Pororo: The Racing Adventure,” the first foreign animated film to be shown on more than 6,000 screens in China. Provided by CJ E&M

“There is a country where two presidents exist. We are going to see an amazing moment where the president for children and the real president meet,” Kim Il-ho, CEO of OCON Animation Studio, said jokingly as he introduced the president-elect.

During the animation event, Park emphasized the growing importance of cultural content as she met with animation industry leaders and university students majoring in animation.

“Watching the growth of ‘Pororo’ over the years, I can see promising signs for the creative industry,” Park said during opening remarks at the meeting.

She also took note of the feat that the little penguin has achieved.

“I heard It’s been 10 years since Pororo appeared and the TV series ‘Pororo the Little Penguin’ has been exported to more than 110 countries with international sales reaching 1 trillion won. It’s a great achievement,” she said.

“One of my pledges during the presidential campaign was to promote our cultural industries, including animation, as a new growth engine for our country, and I will try to be truthful to my word.”