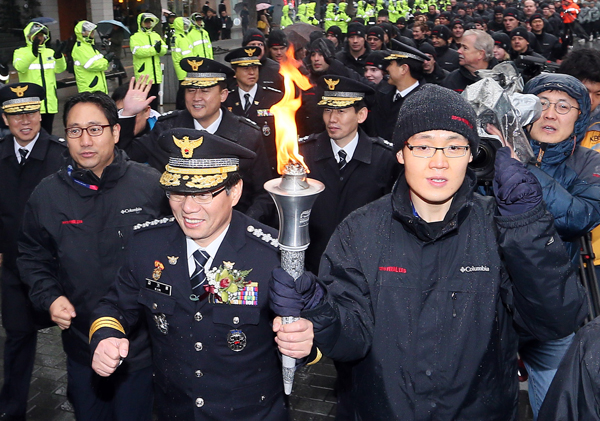 National Police Agency Commissioner General Kim Ki-yong carries the torch for the Special Olympics World Winter Games Pyeongchang 2013 with Ahn Jin-young, an athlete who will compete in the Games, yesterday at Gwanghwamun Square, central Seoul. The torch will be carried by 75 police officers from 21 countries, 10 Korean cops and Special Olympics athletes on a seven-day journey through 39 cities and counties around the nation. On Tuesday, it will arrive at the Games opening ceremony in Pyeongchang, Gangwon. The Special Games will feature 2,200 athletes with intellectual disabilities from 120 countries competing in 32 winter sports from Monday through Feb. 5. [YONHAP]