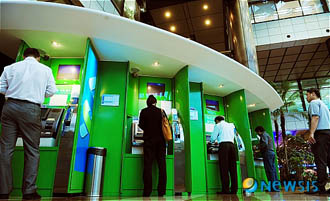 Debit cards with magnetic stripes (MS) will be harder to use from next month as up to 50 percent of all ATMs in the country will no longer be accepting them.

The cards won’t be accepted at eight in 10 ATMs from August and they will be rendered useless at all domestic cash-giving machines by Feb. 1 2014, the Financial Supervisory Service (FSS) said yesterday.

The FSS wants to ban the use of MS debit cards and replace them with cards using integrated circuits (IC) as the latter are more secure. The former kind can be easily duplicated and are more likely to be used in illegal withdrawals of cash.

IC cards have a gold turtle-shell chip on the front.

This is the second time the financial watchdog has tried to encourage customers to stop using their MS debit cards after it was forced to delay its original plan to phase them out from March last year. At the time, it was heavily criticized for a poorly organized transition.

Among the 66.1 million debit cards in use in the country, 96.5 percent, or 63.8 million, used ICs as of the end of December. Those with stripes make up the remaining 3.5 percent, down from 78.7 percent last February.

MS debit cards will only be accepted by ATMs installed in banks from next month.

Meanwhile, the FSS plans to completely phase out MS credit cards from January 2015. Stores need to replace existing card readers with ones compatible with IC cards, the watchdog said.

“To prevent people from falling victim to illegal card duplication, we are asking those who use MS debit cards to go to financial institutions and replace them with IC cards at their earliest convenience,” said Shin Eung-ho, a deputy governor at the FSS.

“Some customers still have MS debit cards because financial institutions failed to get in touch with them to notify them of the change, so they haven’t yet made the switch.”