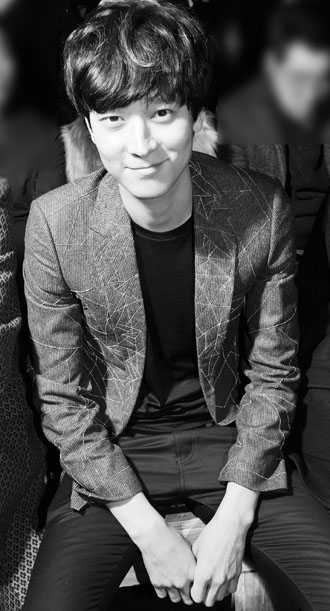 Model-turned-actor Kang Dong-won tapped into his modeling past when he turned up at the Grand Palais in Paris on Sunday to take in the Saint Laurent Paris Men’s Fall-Winter collection for the year.

Decked out in Saint Laurent garb himself, Kang turned heads while he looked on, according to fashion critic Shim Woo-chan who was also there and posted a picture of Kang on Twitter.

The famed French fashion house said that Kang was asked to attend by head designer Hedi Slimane himself.

As the first Korean guest present at the show, Kang took some time to chat with Slimane backstage and congratulated the designer on his first menswear collection at the fashion house.

A spokesperson for the label said that Kang has been a fan of the Paris-born designer for a long time.

Since being released from military service two months ago, Kang is steadily making his comeback into the limelight.

Kang has a short and a feature film penciled in for the next few months.