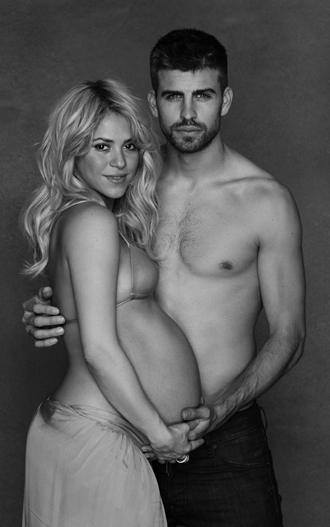 “We are pleased to announce the birth of Milan Pique Mebarak, son of Shakira Mebarak and Gerard Pique, on January 22 at 9:36 pm (2036 GMT), in Barcelona, Spain,” the pair said on Twitter.

They said Milan “means dear, loving and gracious in Slavic; in Ancient Roman, eager and laborious; and in Sanskrit, unification. Just like his father, baby Milan became a member of FC Barcelona at birth”.

The baby weighed in at almost three kilograms (6.6 pounds) and both Shakira and Milan “are in excellent health”, the singer and the football star said in their statement.

In Bogota, Colombian President Juan Manuel Santos sent his congratulations to the couple “on behalf of Colombia and my family” via Twitter.

Pique irked much the world’s media late last month by announcing his girlfriend had given birth - but then revealing it was a prank.

The announcement had also been made on Twitter. “Our boy has already been born! We are very happy! Thank you all for your messages!” he said.

But the message came on the “Day of the Innocents” when people in Spain play practical jokes on each other.

Later Pique seemed to be revealing it was a joke in a second message: “He already has a name! He is called Innocent! Happy Day of the Innocents to all!”

The news site said it “got all excited” by Pique’s first message. “But don’t get carried away like we did,” the paper advised readers. “It’s all thought to be a big prank.”

Spain’s leading newspaper El Pais was equally unimpressed, running the headline: “Shakira and Pique are parents... of the worst joke of the year.” AFP