All alone when death comes knocking

All alone when death comes knocking 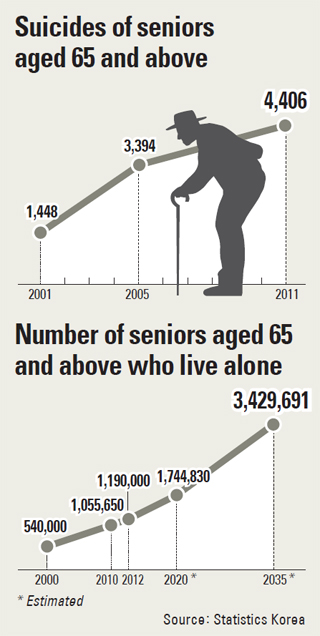 Kim Seok-hun, 37, has a dirty job. When the hearse is gone and relatives are informed, it’s his job to clean away the remains of people who die at home.

The head of Biohazard Sweeper takes care of the rotting flesh and blood left by bodies not discovered for days, or even months, after death.

Yet it’s not just the disturbing scenes and overwhelming stench - described as “intense cat feces” - that get to him. It’s the job of essentially erasing any trace of someone who was once a living, breathing human being.

“Most children want me to scrap all of their parents’ belongings, even family photos,” he explained.

Kim’s profession is a darker element of Korea’s steadily aging society that is often not explored. As the country’s elderly population overwhelms government programs designed to assist those in their twilight years and younger Koreans are less willing to take care of their parents and grandparents, a phenomenon called godoksa, or “lone death,” has taken hold.

“When I began this business, I did about 10 cleanups per month, and now I do about 20,” Kim said. “They are mostly godoksa.”

Lone death used to be associated only with poor seniors, but today, one’s status seems to matter less and less in the face of overwhelming numbers.

In June, the corpse of a professor in his late 60s was not found in Gwangju until one month after his death, so decayed that he could not be identified. His wife and children were living abroad.

And in December, the body of a 1970s volleyball star was discovered almost 20 days after her death at the age of 60 in Beon-dong, Gangbuk District, northern Seoul.

Nearly 1.2 million elderly Koreans lived alone as of last year, according to Statistics Korea, a whopping increase compared to 2000, when 540,000 seniors lived away from their families.

That number is only expected to increase further, according to the statistics bureau. It expects about 3.4 million to be alone by 2035, with a significant portion left alone after divorce or death of a spouse.

Government and volunteer organizations have recognized the problem, but have thus far only managed to put together a patchwork of programs woefully inadequate to support seniors who need care.

As the number of seniors living alone grows, many fear godoksa or “lone death.” In this picture, a senior in his late 70s watches television at his shoddy house in Gongneung-dong, Nowon District, northern Seoul. [JoongAng Ilbo]

In Korea, filial piety, a tradition which dictates that the young must take care of their ailing parents, has long been taken for granted. So as this way of thinking wanes, the country’s support systems are struggling to catch up.

“The government and local communities have started to beef up the social safety network, but the thing is that people have become disconnected from their families and friends at a rapid pace,” said Kwon Jung-don, a professor of social welfare at Mokwon University.

“The efforts of the government can’t keep pace with the breaking up of human relationships.”

In early 2011, the Ministry of Health and Welfare launched the Comprehensive Support Center for Elderly People Living Alone, designed in part to take the place of family members who no longer see caring for older relatives as a top priority.

Under the auspices of the center, roughly 5,500 paid assistants visit senior citizens, and the number of employees is expected to rise to at least 6,600 this year.

“Any senior can apply for the service as long as he or she lives alone,” said Hong Ju-young, a manager responsible for assistants in Ulsan.

“We select participants based on the urgency of their need for care. Assistants visit once a week and make phone calls twice a week.

“In addition, the assistants give a helping hand with minor things such as helping them convert to digital TV.”

Yet the number of seniors and families requesting the service is quickly outnumbering the available assistants in Ulsan and elsewhere.

Even Seocho District, in southern Seoul and the wealthiest district in the city, has the same problem.

“We have 18 assistants for seniors, but there are 5,596 elderly people living by themselves within the district,” said Kang Byeong-ryeol, a team head for the welfare of senior citizens in the district.

Anecdotal evidence of more people living alone is backed up by statistics, as the number of single-person households in 2010 was 4.1 million, an 86 percent increase from 2000, according to Statistics Korea.

The numbers have led some experts to call for even more comprehensive solutions to the aging issues, as children don’t seem likely to take up responsibility for their aging relatives any time soon.

“Children no longer live with their parents. Even though they live apart, children still can check on their parents, but some can’t afford to do so for many reasons,” said Chung Kyung-hee, a senior researcher at the Korea Institute for Health and Social Affairs. “In the past, not only families but the community as a whole prevented such tragic deaths, but not anymore. It’s not an easy issue, but we have to think about ways to shore up individuals’ relationship networks.”

Closer to the problem than the central government, local governments across Korea have been more ambitious in their efforts to assist seniors living alone.

In particular, group homes that house a large number of seniors together in one facility are growing in popularity.

The government of Gimje, North Jeolla, began the group home initiative in 2006 with two facilities. Now, there are about 120.

Officials provide between 25 million won ($21,740) and 50 million won to each home for repairs and start-up costs, and facilities also receive 3 million won per month for operational costs.

Haksu Group Home in Dongjisan-ri, Cheongha-myeon, houses women aged 65 to 92. Residents generally eat and sleep under one roof, but are free to come and go as they please.

In a survey commissioned by the Gimje government last year, 93.3 percent of 240 group home residents said they felt less lonely living with other seniors.

The number of monthly visits to medical clinics also decreased from 1.4 to 0.5 on average per person, and residents also mentioned being able to save on heating, cooling and food expenses.

“I didn’t feel like eating when I lived alone, but now I try to eat one more bite as I have regained my appetite,” Kim Jeong-ok, 79 told the JoongAng Ilbo.

Based on this success, the initiative seems to be catching on elsewhere. The Chungnam Provincial Office expects to provide subsidies to 26 group homes this year.

“We started to provide financial subsidies in 2010 so that seniors could live with other seniors,” said Lee Jong-pil, an official at the health and welfare bureau of the provincial office.

Seniors, though, still struggle to cover some financial costs, especially as they are required to shoulder any costs not covered by the government subsidies - before and after death.

Left: The Gongju city government in South Chungcheong held this cooking class for seniors who live alone last March, but it has been scrapped this year due to budget constraints. Center: The Ministry of Health and Welfare launched the Comprehensive Support Center for Elderly People Living Alone in early 2011, which sends assistants to seniors’ homes. Right: Women aged between 65 and 92 live together like a family at Haksu Group Home in Gimje, North Jeolla.


Troubled even after dying

Faced with larger numbers of people dying alone in their homes, local community organizations noticed a big gap in the fledgling government support programs: help for the poor and elderly after death.

Funeral expenses can amount to hundreds of millions of won, costs widely beyond the means of most seniors who live alone. So, local community organizations have banded together to fund funerals for those with no one to help, and the national taxi association is helping to lead the way.

“Years ago, I saw three coffins dropped off at a crematory by a man. He dropped them as if throwing away trash,” said Sohn Sam-ho, head of the taxi drivers’ volunteer group. “I later realized that the three coffins held the bodies of people who died alone. I think we need to soothe these weary souls as they depart.”

The volunteer group, in operation since 2007, now collects 50 million won each year from members and conducts funerals for 30 people annually.

Those who hope to become beneficiaries of community funerals must technically pay 1,000 won per month to a group, though they promise to hold funerals even for those who cannot afford the monthly fee.


The next challenge: the not so elderly

Still, these efforts are lacking. Many more seniors are still left out in the cold as the number of those needing support continues to go up.

The Ministry of Health and Welfare also conducts funerals for people who die alone, but the help simply cannot reach all those marginalized people in need of assistance.

And those familiar with programs for seniors persistently insist that there’s yet another frontier in the fight to support the aging. In most cases, only those older than 65 years of age are eligible for government support, and yet younger seniors lack family support, too.

Biohazard Sweeper’s business is booming these days, but that doesn’t comfort its head, Kim.

“I think deaths of older people are decreasing because many of them are receiving help from the government and volunteer workers,” he said. “But deaths of people in their 50s and 60s are increasing, indeed.”