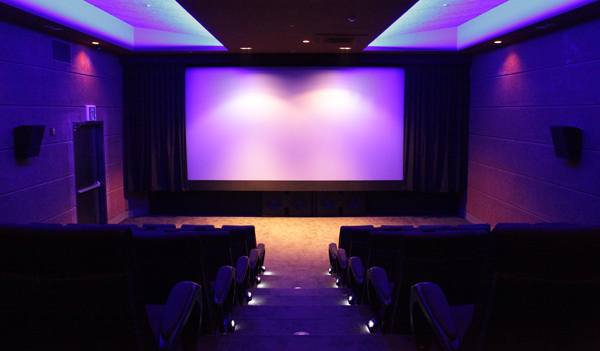 Because movie projectors can’t evenly reach upper and lower parts of screens, the screens at Art Nine are tilted outward at the bottom for a better picture. Provided by Art Nine


In a Korean film industry dominated by franchise multiplex chains, where just buying a ticket and getting popcorn can be an adventure, independent theaters are slowly but steadily making inroads.

The success of Cinecube in Gwanghwamun, central Seoul, is one example.

The art-movie house with only two screens enjoyed its best year in 2012, attracting 260,000 people, an 18 percent increase compared to the previous year.

The selection of movies at Cinecube may be the biggest draw for film aficionados, but the more comfortable, relaxed atmosphere of independent theaters also plays a role. 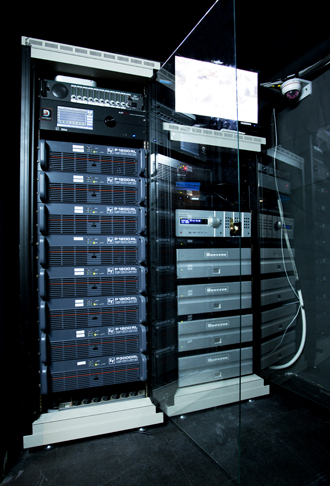 That’s what Art Nine, a new art movie house in southern Seoul, wants to achieve. “I always wondered why people have to put up with the popcorn smell and why they can’t sit through the end of the credits,” says Jeong Sang-jin, 44, the head of Art Nine.

Besides showing movies, Art Nine also promotes itself as a cultural complex with good food and fine art.

When it opened Jan. 9, Art Nine became the first art movie house located in the southern part of Seoul. Previously, the only option for seeing a movie in the area was the Apgujeong branch of CGV.

As the head of At9 Film, which imports and distributes films, Jeong operates the Isu and Paju branches of Megabox.

Art Nine is located on the 12th floor of the Gold Cinema building.

Art Nine has two theaters, one with 92 seats and the other with 58. Though the number of seats is far smaller than at other theaters, there are twice as many speakers: 23 Electro-Voice and JBL units in each.

The differences between Art Nine and the megaplex theaters extend right to the screens themselves. Those at multiplex chains are installed perpendicularly to the audience’s line of vision, even though projectors leave a uneven white space at the edge of the image. At Art Nine, the screens tilt outward at the bottom to provide a better picture. 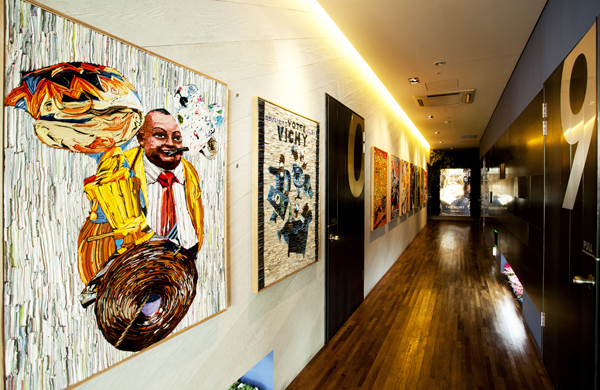 Outside the theater, several works by young artists are on display. Provided by Art Nine


A fourth of Art Nine’s budget went for sound and projection equipment, and the Isu branch is already famous for its sound among movie lovers.

“There are many people who can tell the difference between Art Nine and other theaters,” says Jeong. “I hope they will come and enjoy films here instead of purchasing a home theater system.”

Another characteristic of Art Nine is its casual restaurant, Eat Nine, which also serves as a lounge. Exiting the elevators, visitors are led into the restaurant, where they can flip through magazines or access free wireless Internet service while waiting for the show to start.

If you are fed up with cheap snack bar fare such as hotdogs and popcorn, Eat Nine is highly recommended. The restaurant uses fresh pasta but prices are far lower than some other premium theaters that serve food. Pasta dishes start at 10,900 won ($9.50).

Art Nine also showcases the work of young artists. Currently, Lee Seung-O’s paper assemblage works are on display at every corner of the movie house. 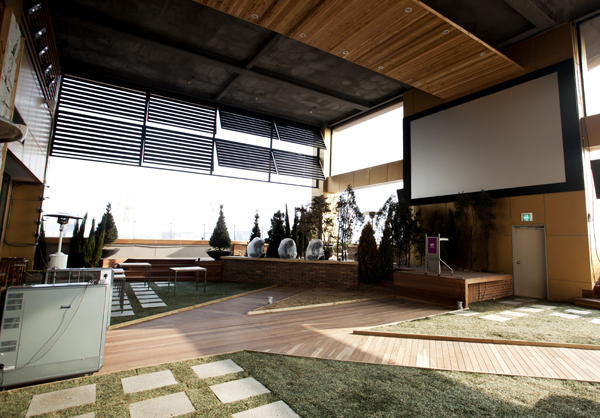 The open-air terrace at Art Nine. By Jeon Ho-seong

Art Nine also has its own open-air terrace, a space that is available to young artists free of charge throughout the year.

“I think it’s a fair price for people who are willing to pay slightly more for better movies and other cultural activities,” says Jeong. “I hope this space will be loved by those people.”