A more app-etizing way to book

A more app-etizing way to book 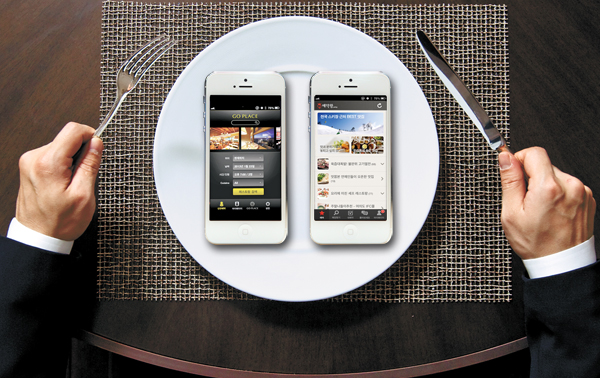 If your spoken Korean isn’t good enough to book a restaurant over the phone, you may have tried to find an app like OpenTable, which is popular in the U.S., Japan and some European countries, to navigate the language barrier.

And most likely, you would have ended up slamming your handset down in frustration due to lack of service.

However, some new offerings such as Poing and Go Place are addressing the problem and starting to plug the gap. Even though neither app offers an English-language service yet, just a rudimentary knowledge of written Korean is enough to facilitate their use.

In other words, if you can understand which data indicates the date, time, restaurant name and number of diners who will be attending, amid the sea of Hangeul characters, then theoretically, you’re good to go.

Both free apps come from local startups, and are available on the Android and Apple iOS platforms. They’ve been gaining traction with local users since they debuted late last year.

All users need to do is download the app, register their e-mail address and mobile number, and turn on the location-recognition option. They then choose whether to let the app recommend restaurants nearby, or designate a specific neighborhood or restaurant elsewhere themselves. After this, all that is required is the simple inputting of some data to make and confirm the booking.

Poing has been downloaded by over 230,000 users since its iOS version was released in July, followed by an Android version in October. Over 30,000 restaurants can be booked with the app nationwide.

Go Place, whose spokeswoman declined to provide the exact number of downloads since it was released in September, offers a choice of 150 restaurants within the Seoul Metropolitan area. The small concentration of eateries in contrast to Poing is explained by its strategy of focusing on more upscale restaurants, according to its spokeswoman.

The list includes those housed in five-star hotels like the Park Hyatt and Banyan Tree, as well as those introduced in the Zagat or BlueRibbon Survey, a domestic gourmet ratings service that is similar to the Michelin Guide, the latter not yet being available in Korea.

The belated arrival of those apps has been welcomed mostly because diners can avoid the hassle of speaking on the phone, which can be stressful for foreigners and just an annoyance for more timid Korean speakers. What’s more, they can cancel the reservation simply by pressing an icon, without having to make a follow-up call.
The apps also make life easier for restaurants, especially when it comes to people who make reservations then never show up. As the culture of fine dining has become more widespread in the country in recent years, and reservations at exclusive restaurants or those with limited seating become more coveted, the practice of double or triple booking places has become rampant. This scourge reached its peak a few weeks ago on Christmas Day and New Year’s Eve, when the multitude of no-shows left many of the top eateries in Seoul half empty, and many of the best cuisine reduced to garbage pail filler.

Oh Se-deuk, an owner and chef at July, a French restaurant in Seorae Village, southern Seoul, said there has not been a single “no show” with reservations made using smartphone apps. However, he has to deal with several every day from those who book by phone. The restaurant can be booked on both Poing and Go Place.

As so few Koreans want to deal with the embarrassment or unpleasantness of canceling by phone, “apps seem like the best way of making bookings,” he said.

To reduce the number of bad eggs further, Poing has even devised a system under which it provides points that can be redeemed at a value of 500 won ($0.47) each whenever the user makes it to the restaurant they book. Both Poing and Go Place send friendly reminders to the user’s phone prior to the reservation.

The two apps differ from each other in terms of their target audience and method of making reservations, as well as their supplementary services.

For Poing, Ablar Company, a mobile app developing startup founded in 2010, has developed a system that makes a phone call to the restaurant the moment its user makes a reservation and delivers the customer’s reservation information using an automated voice service.
“The automated system made it unnecessary for us to visit and sign a contract with each restaurant, which has saved a lot of time and money,” said spokeswoman Lee Meena.

Go Place, run by IMG Partners, a mobile marketing platform provider that also publishes an eponymous quarterly gourmet magazine, focuses more on special promotions such as short-term discounts for restaurants that seem least likely to make such gestures due to their premium image. For instance, those who book seats at Ninth Gate Grille at the Westin Chosun Hotel in central Seoul using the app can receive a 25 percent discount if they visit on a weekend before Feb. 28.

Poing offers a slightly friendlier service tailored to a younger demographic. As soon as it starts up, it updates a list of recommended restaurants with themes such as hot spots near ski resorts or restaurants run by celebrities.