Foreign cars firing on all cylinders

Foreign cars firing on all cylinders 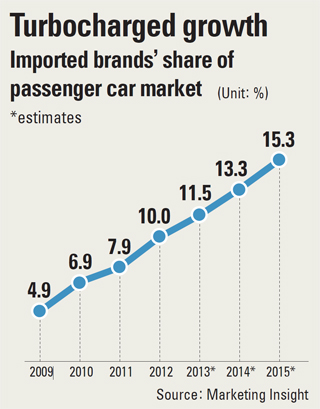 Imported cars will further expand their presence in the local auto market as more consumers are favoring foreign brands as their first choice, according to a report from Marketing Insight, a local consumer research group,

Sales of imported cars have been growing sharply in recent years. According to data from the Korea Automobile Importers and Distributors Association, 130,858 foreign cars were sold here last year, up 24.6 percent from 2011.

This is the highest number since Korea opened its market to foreign auto brands in 1987.?

The market share of imported cars took up 10 percent of the local passenger car market last year. But according to Marketing Insight, its share will move past 15 percent in 2015.

The group predicted that imported cars will eat up 11.5 percent of the market this year and 13.3 percent in 2014.

The report said more Korean consumers plan to buy a foreign vehicle in the future.

The yearly survey shows a gradual upward curve in terms of those who put imports as their preferred choice. The poll is taken on 100,000 consumers who intend to buy new cars within the following two years.

The results show that those who selected imported models as their first choice jumped 2.8 percentage points in 2011 to 16.5 percent.

They also show that the number was growing sharply until it was hit by the 2008 global crisis, and is now in a recovery phase.

In 2008, 15.2 percent of people answered that they would select foreign-made cars as their next vehicle, but the proportion dropped to 10.9 percent in 2009.

“Consumer sentiment about foreign cars is similar to how it was just before the 2008 global crisis,” Marketing Insight said in its report. “They want to buy imported cars, but financial difficulties add pressure.”

For carmakers, the research group said the business environment has changed since 2009 and they may have to try harder to catch consumers’ attention.

“In the past, local carmakers and imported brands competed in different leagues, but now, they are competing for the same audience with more or less the same level of skill and equipment,” the report said.