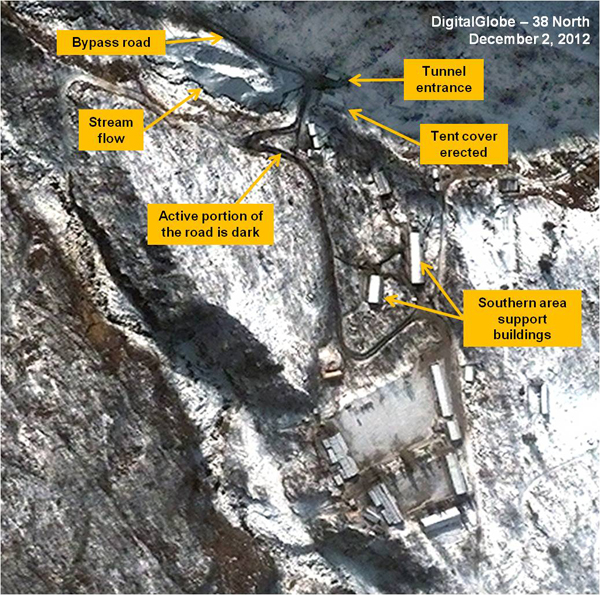 A satellite image from DigitalGlobe taken on Dec. 2, 2012 shows North Korea’s Punggye-ri nuclear test site in Kilju County in North Hamgyong. The site was damaged by floods during the summer, but experts said restoration work was done and the site is ready for a nuclear test. [AP/YONHAP]


With North Korea declaring it was ending any effort to wind down its nuclear weapons program yesterday following additional sanctions imposed by the United Nations Security Council, new attention is focused on President-elect Park Geun-hye’s policies toward the communist regime.

Concern is rising that Park’s planned policy based on a so-called trust-building process that restores inter-Korean exchanges will be dead on arrival when she takes office next month.

“We strongly urge North Korea to stay away from any action that will worsen the situation further, such as conducting a third nuclear test,” said Yoon Chang-jung, spokesman for Park’s presidential transition committee, said yesterday.

He said, however, that the Lee Myung-bak administration is responsible for deciding the next move by Seoul.

Pyongyang yesterday vowed to give up its promise of denuclearization following new sanctions, and suspicion is growing that young leader Kim Jong-un will conduct the country’s third nuclear test.

If that happens, analysts say it’s unclear whether Park will be able to lift or ease South Korea’s own sanctions on the North as she proposed in last year’s presidential campaign.

On May 24, 2010, Seoul imposed economic sanctions on top of the UN sanctions after the North sunk the warship Cheonan two months earlier. The Lee government cut all exchanges with the Kim Jong-il regime except the operation of the Kaesong Industrial Complex. Despite calls for the exchanges to resume, the Lee government has refused to budge.

Earlier this month, Yun Byung-se, who oversees the transition in foreign affairs for Park, hinted at a possible change in the May 24 measures. “Though it’s too early to talk about specifics,” he said, “we will have some kind of an outline later on.”

Making matters worse, the outgoing Lee government has announced it is open to discussing with Washington separate sanctions on the North apart from those of the UN, which could sour inter-Korean relations even more.

“We have informed the Park transition team and the president-elect about the background,” said a Foreign Ministry official. “But we were never given any specific guidelines from them. We’ve followed the Lee administration’s guidelines.”

“North Korea will wait and see the response made by Park,” predicted Park Young-ho, a senior researcher at the Korea Institute for National Unification, “and will play its third nuclear test option. If the North goes ahead with a nuclear test, the Park administration will be in a great dilemma.”