After 52 years, the Supreme Prosecutors’ Office said it would disband its powerful but controversial Central Investigation Unit bowing to President-elect Park Geun-hye’s wishes.

The investigation unit handled high-profile corporate and political cases but has been criticized over the decades for going easy on some privileged figures and attacking others with unfair rigor - depending on which party was in power.

But it was unclear yesterday what would replace the unit. 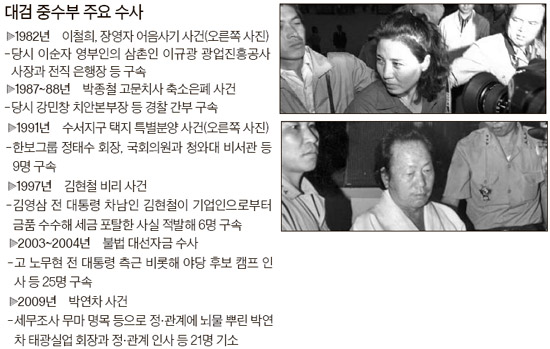 According to sources from both Park’s transition team and the top prosecution agency, the prosecutors proposed to the transition team that a new special investigation office affiliated with the Supreme Prosecutors’ Office be established to take over the unit’s job.

The proposed special investigation office would handle high-profile cases that are of strong concern to the public, such as the case involving Lee Si-hyung, President Lee Myung-bak’s son, who was accused of violating the country’s real estate laws. It would also handle big economic and corporate scandals.

After the Central Investigation Unit is disbanded, the prosecution said in its report to the transition team yesterday, “a department to give support to frontline prosecutors and investigative prosecutors from provincial offices should be retained.”

President-elect Park promised during the election campaign to shut down the elite unit and form a special organization separate from the prosecution.

Park also said she would introduce a U.S.-style grand jury system in which the power to indict would be devolved.

An internal turf battle between the prosecutor general and the head of the Central Investigation Unit rocked the prosecution last year and gave it a black eye in the view of the public.

Han Sang-dae, chief of the Supreme Prosecutors’ Office, was forced to resign last month to take responsibility for graft and bribery scandals involving prosecutors. Han had pushed for the shutting down of the Central Investigation Unit.

His rival, Choi Jae-kyung, chief prosecutor of the Central Investigation Unit, also stated his intention to resign last month in order to take responsibility for the scandals, which he investigated vigorously to embarrass Han.

The elite unit was formed in 1966, first as a central investigation bureau. Over the past half-century, all major cases of bribery, embezzlement and torture involving politicians and families and relatives of former presidents went through this unit.

In the 1960s, the unit indicted Samsung Group Chairman Lee Byung-chull’s second son, the late Lee Chang-hee, for involvement in the 1966 saccharin smuggling incident, in which over 50 tons of saccharin, used as an artificial sweetener, were smuggled in as construction material.

In 1980s, the investigative unit handled the cases of torture, waterboarding and death of a Seoul National University student activist, Park Jong-chul, in 1987.

That led to the imprisonment of some police authorities involved in covering up the case.

“Because the prosecutor general, who is sensitive to political influence, directly oversees investigations, politically charged investigations and indictments are endless,” said Park Kyung-shin, a law professor at Korea University.