A North Korean espionage scandal implicating a defector-turned-Seoul city government official has put the government under fire for lax handling of defectors to the South.

On Monday, the Seoul Metropolitan Government said the National Intelligence Service arrested a 33-year-old man surnamed Yu on Jan. 11 on suspicion of giving Pyongyang information on some 10,000 fellow defectors living in Seoul. Yu worked for the city government, and was supposed to be a North Korean defector who came to the South via China in 2004.

It turns out he is a Han Chinese with Chinese nationality who may have once lived in North Korea.

Analysts said the security measures used by authorities in Seoul to flush out North Korean spies pretending to be defectors remains unchanged from the 1990s, when only a trickle of defectors came to the South every year. Now more than 1,000 come each year, overwhelming the government’s vetting procedures. 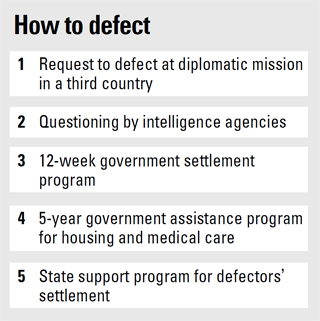 Yu, who was arrested Jan. 10 and is awaiting trial, at one point lived in North Hamgyeong Province, the northeastern part of the communist state that borders China, according to Yonhap News Agency.

One government official, who asked not to be named, noted it is much harder these days to conduct in-depth questioning of defectors due to their swelling numbers.

“In the past, probing was conducted only on those from the elite social class in the North,” he said. “Nowadays, we question thousands of refugees.”

According to other defectors, it’s not so hard to fool the authorities.

“Officials asked us the birthday of Kim Jong-il or to sing some local songs when they question us,” a defector told the JoongAng Ilbo. “I have seen cases in which Chinese nationals passed such tests after cramming to learn some local songs.”

Yu’s behavior in the South also suggests weaknesses in defector management. In 2006, Yu was discovered to have visited the North but he avoided punishment by saying he went because of his mother’s death. The authorities are reportedly suspecting that Yu began cooperating with Pyongyang after his visit to the North in 2006.

In 2011, Yu landed a Seoul city government job and began working at the welfare policy division for defectors. The Seoul Metropolitan Government hired him after checking that he did not have a criminal record in the South. After he was employed, Yu gave media interviews without hiding his face, which was unusual for a defector who said he left behind family in the North.

“I thought it was strange that Yu agreed to publish a photo of himself when his family was still in North Korea,” said another defector who also declined to be named.

One official at the Ministry of Unification told the JoongAng Ilbo that it’s unlikely Yu has given the North information on 10,000 fellow defectors because that information is confidential.

But a city official who had worked with Yu said the opposite.

“The files for defectors in the minimum livelihood government assistance program contain details such as addresses, occupations and other personal histories,” said the official. “If Yu did leak those profiles, information on 10,000 defectors in Seoul are possibly in the hands of Pyongyang.”