After veto, politicians divided on how to satisfy taxi industry

After veto, politicians divided on how to satisfy taxi industry 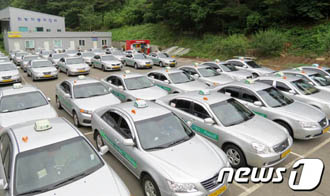 After President Lee Myung-bak vetoed a bill to offer state subsidies to the taxi industry, the ball is in the court of the National Assembly to make the cabbies happy.

But the ruling and opposition parties are parting ways on how to do that.

The opposition parties including the Democratic United Party are vowing to reapprove the bill, which was supported on both sides of the aisle, through a two-thirds vote in the Assembly, defeating Lee’s first ever veto of a bill.

The ruling Saenuri Party is backing away, hoping the government will come up with an alternate support that the taxi drivers will accept.

The taxi drivers also backed away from an early plan to protest today in a manner that would have taken many cabs off the road. But they announced plans for strikes in the next few weeks if the Assembly or government doesn’t come through for them.

The latest poll showed that the public supported Lee’s veto, which may be influencing the Saenuri Party lawmakers.

According to a poll jointly conducted by the Korea Broadcasting System and Media Research Tuesday of 1,000 adults nationwide, 65.2 percent said the president made a right decision to veto the taxi bill, while 23.9 percent said it was a wrong move.

On Tuesday, Lee vetoed a bill for the first time as president. It would designate taxis as mass transportation, which would put the industry in line for about 1.9 trillion won ($1.78 billion) in government subsidies.

The Lee administration called the bill a populist, pork-barrel pledge that was made to get taxi driver votes before last month’s presidential election. The government said taxis shouldn’t be deemed mass transportation as only 9 percent of people traveling every day take taxis whereas buses, which operate on set routes and schedules, carry 31 percent.

In the poll, only 21 percent of the respondents said the legislature must reapprove the bill while 70.2 percent said the taxi industry should accept the government’s alternative plan, which has yet to be disclosed.

The four leading groups of the taxi industry, including the Korea National Joint Conference of Taxi Association, announced late Tuesday evening a schedule of protest and strikes.

They said that they will put black ribbons on taxis starting from today, a move symbolizing the “death” of the industry. But a mass protest in Seoul, which would have taken taxis off the streets, was delayed.

They said nationwide strikes will begin sequentially starting with a rally in Busan on Wednesday and Gwangju on Feb. 1.

The biggest rally will be staged Feb. 20 with 300,000 taxi drivers coming from around the country to Seoul to urge the National Assembly to repass the bill.

“How long the protest goes on depends on the legislature’s action,” Yoo Byeong-woo, chairman of the private taxi associations said. “The government said it will bring its alternative plan to the National Assembly but they never provided a timeline, so we can’t trust it.”

“We will first take a look at the plan that the government will provide for the industry,” Lee Hahn-koo, floor leader of the ruling Saenuri Party, told reporters yesterday.

The Ministry of Land, Transport and Maritime Affairs said it will come up with plans to reduce the oversupply of taxis and also give more benefits to drivers. It said the drivers’ current 1.58 million won monthly wage can be increased to 2 million won if the number of taxis is reduced. The ministry said 20 percent of the nation’s total of 250,000 taxis are in oversupply.