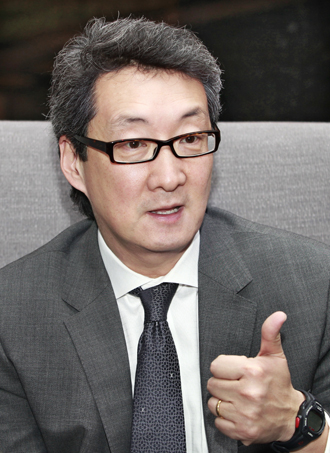 Though sanctions on North Korea haven’t stopped its nuclear weapons program, they do slow down its progress, said Victor Cha, professor at Georgetown University and Korea chair at the Center for Strategic and International Studies.

“They [North Korea] had to get sanctions and it was a good step,” he said in an interview with the Korea JoongAng Daily yesterday at the Plaza Hotel in central Seoul, referring to new sanctions approved by the 15-member United National Security Council Tuesday in response to the regime’s rocket launch in December. “The rocket launch needed some sort of response.”

Cha, who served as director for Asian affairs at the White House’s National Security Council in the George W. Bush administration, added that any kind of sanctions on Pyongyang “help slow down North Korea’s acquisition in financing their weapons program.

“Sanctions are not stopping it, but if there are no sanctions, they would be developing much more quickly,” he said.

Cha arrived in Seoul Monday for a four-day visit to attend a forum entitled “The Korea-Project: Planning for the Long Term,” hosted by the Asan Institute for Policy Studies.

Imposing sanctions is not the final answer, he said.

“There has to be something else that the United States and others have to think about,” he said. “In this regard, they’ll [the U.S.] be looking a lot at the direction from the new government here to decide how they want to approach this problem.”

Dealing with North Korea has been one of the main challenges for a new government in South Korea. In President Barack Obama’s first term, the U.S. tried to engage Pyongyang without much luck.

“The issue isn’t either U.S. or South Korea policy, because you had a wide variety of policies and yet the outcome from the North Korean side is the same with nuclear and missile tests,” Cha said. “Whether you do a leap day deal [providing food aid to North for suspending its atomic program as was agreed last Feb. 29, a so-called ‘leap day’] or you don’t do anything at all, you get the same result, which is nuclear tests and missile tests,” Cha said. “So I don’t think the problem is policy on the outside. The problem is North Korea.”

Cha discussed China, North Korea’s closest ally, and how it can help pressure Pyongyang to end its nuclear weapons program.

“China shouldn’t do it for the U.S., but it should do it for China’s interest,” he said. “It [nuclear weapons on the Korean Peninsula] doesn’t benefit them at all.

“China is the key to this because they are the only country that is giving them support.”

The question for China, according to Cha, is “does it [China] want to be remembered as the last country to support North Korea or does it want to see its future with South Korea and with everyone else?”

Whether China will change is doubtful.

“China is still caught in the status quo mentality where the only thing they want to really do is maintain the existing situation because it is the most predictable,” Cha said.

“Just because he [Kim Jong-un] has a wife and goes to some performances .?.?. That’s not really a sign of real reform,” he said. “While he does those small, stylistic changes, he’s done two ballistic missile tests in one year, which is more than we’ve ever seen before.”