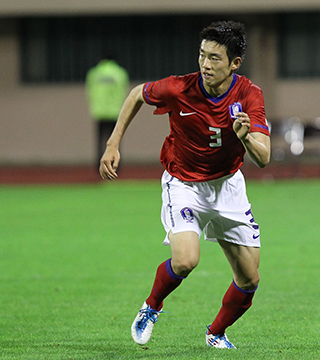 According to his Korean club, the Chunnam Dragons, yesterday, Yun, 22, will become Korea’s 11th Premier Leaguer if he passes a physical.

Yun, who was training with the Dragons in Bangkok, will leave for England soon, the Dragons said, adding that the two clubs agreed not to disclose details of the contract.

Known for his stable, industrious roles in left back, Yun had been linked to several European clubs for months. Since the 2012 London Olympics, where he contributed to Korea’s bronze medal performance, he had been mentioned in connection with Premier League clubs Manchester City, Tottenham and Everton.

He was exempted from compulsory military service after winning the bronze medal in London.

Fulham, another Premier League club, also sent him an invitation recently, which the Korean club declined, apparently having neared the deal with QPR.

The four-year professional played in 86 games with the Dragons since 2009, recording four goals and 10 assists. He was also a member of Korea’s bronze medal team at the 2010 Guangzhou Asian Games.

“Yun Suk-young contributed to the team when the team had a hard time last year, and Chunnam set an internal guideline that it will transfer him overseas for the player’s future and the development of Korean football,” the Dragons said.

Yun decided to stay with the Dragons when he was given an offer from Bundesliga club Hoffenheim early last year. The Dragons finished 11th in the 16-team K-League, with 13 victories, 14 draws and 17 losses.

Some Korean football commentators said Yun will have a good chance of getting playing time immediately. QPR has won only twice this season and is at the bottom of the EPL standings with 14 games left, four points behind Reading and Wigan, both with 19 points. Aston Villa is at 16th with 20 points.

“In the winter transfer market, unlike the summer transfer market, the teams bring in players they can immediately put to use like [Loic] Remy,” said Park Moo-sung, SBS football commentator, referring to the French striker who recently joined the Rangers. “QPR, whose priority is to get out of the relegation zone, has no time to think about investment in the future.”

Lee Yong-soo, a KBS football commentator, said Yun’s quick, clutch cross could be a competitive edge for him over other QPR defenders.