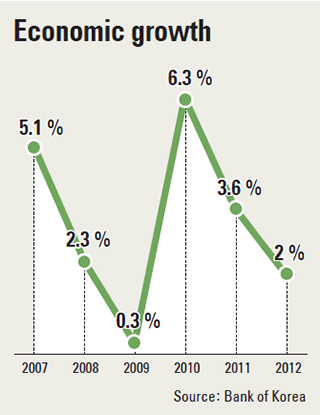 The Korean economy grew at the slowest pace in three years in 2012, underperforming earlier forecasts as GDP expanded by just 2 percent, according to the Bank of Korea.

This was the worst growth tallied since 2009, when it inched up 0.3 percent on-year in the aftermath of the global credit crunch. It was also lower than the central bank’s most recent prediction of 2.4 percent, the last in a series of downwardly revised projections.

The central bank started 2012 with a relatively sunny outlook in the belief the economy would expand 4 percent, but this got diluted throughout the year by the global recession, the lingering euro zone crisis, China’s slowing economy and fears of an unavoidable U.S. fiscal cliff.

The Korean economy capped the year by rebounding to post a 0.4 percent on-quarter gain, building on the previous quarterly rise of 0.1 percent. Nonetheless, it still fell short of the 0.8 percent rise that the central bank projected.

Exports, which account for about 50 percent of the economy, declined 1.2 percent on-quarter in the fourth quarter, after growing 2.8 percent in the previous quarter. Overseas shipments grew 3.7 percent last year, the weakest gain in three years.

The economy was able to improve in the fourth quarter largely to the improved spending.

Private spending rose 0.8 percent in the last three months, picking up from 0.7 percent growth in the third quarter.

However, the central bank seems convinced the situation will improve this month.

Kim of the BOK described the situation of the Korean economy in 2012 as having been traveling along an unpaved road in fog, adding that at least the fog seems to have lifted this year.

“Economic growth is likely to improve in the first half, helped by increased fiscal spending by the incoming government,” Kim added.

The biggest concern that could offset this optimism is the appreciation of the local currency affected by the credit easing moves of advanced economies.

The BOK said it remains to be seen whether the won’s gain will affect the value of exports in the first quarter, but analysts said a stronger won would serve as a factor restricting exports.

“Quarterly growth is estimated to have bottomed out in the third quarter. It will improve this year, but the overall economic outlook remains dim,” said Lee Sung-kwon, a senior economist at Shinhan Investment.

“Exports may be limited all year, however, some industries, especially automakers that are competing with Japanese brands, will be in trouble due to the won’s ascent against the Japanese currency.”

More analysts are betting on a rate cut in the first quarter based on the belief that the central bank will support the incoming government’s move to prop up the economy.

The new administration of President-elect Park Geun-hye is widely expected to adopt stimulus measures in the face of lingering economic uncertainty at home and abroad.

Earlier this month, the BOK froze the key interest rate at 2.75 percent for the third straight month.

“The worst is behind us,” said Ronald Man, an economist at HSBC. “The key takeaway is that quarterly growth accelerated. This confirms our view that the economic cycle in Korea has bottomed out in the third quarter. High frequency data also point toward a pickup in global economic activity, especially in China, and that Korea remains on track to benefit from an export-led recovery over 2013.”

“In terms of policy, monetary easing and fiscal stimulus are already at play. The economy has yet to benefit from the full impact of the two rate cuts delivered by the BOK last year - particularly the one in October. Also, the government has already frontloaded around 70 percent of government spending into the first half of the year,” he added.

“Together, these will keep domestic demand firm, buying time for export growth to run at full steam again.”

Egg tariffs lifted for another six months as shortages remain