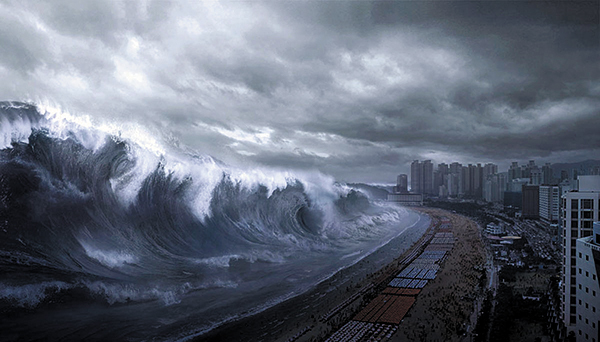 Hyundai Motor’s headquarters in Yangjae, southern Seoul, resembles a war room these days as employees closely monitor currency movements to see if the Japanese yen will keep on devaluating at an alarming rate, a trend that began when Shinzo Abe was named prime minister last month.

The weaker yen has become the biggest threat to Korea’s top automaker in recent years as it makes brands like Toyota and Honda cheaper here and in hotly contested foreign markets like China and the United States.

“We are following the won-yen exchange rate more closely than at any other time,” said a Hyundai Motor executive, adding that the company has been holding numerous meetings on the issue recently.

As Japan’s new “Abenomics” quickly start to pose a threat to Korea’s export-driven companies, the automobile industry looks especially vulnerable as its rivals gain a competitive edge. Korean makers of cars and car parts have expanded aggressively in the global market since 2008, when the Korean won remained weak against major currencies, including the yen.

But industry observers are skeptical about whether this favorable performance will continue. 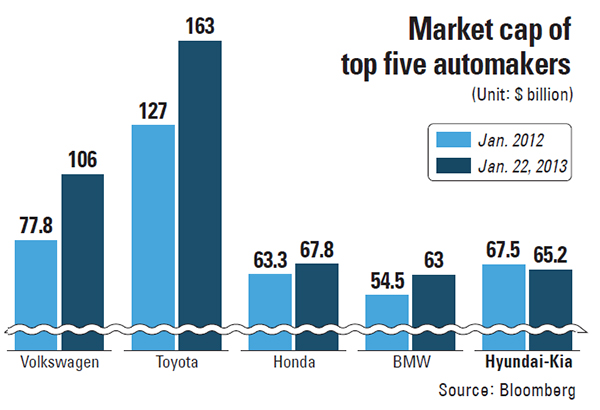 FnGuide, a financial information provider, in a report released yesterday projected Hyundai’s net profit in the first quarter would slide 4.5 percent from a year earlier to 23 trillion won as its overseas sales could be dented by the rising won, while rival Japanese automakers including Toyota will prosper.

Hyundai and its smaller affiliate Kia Motors have been preparing for such adversity by setting up production plants across the globe.

With the completion of its latest factory in Brazil, Hyundai now has manufacturing plants in the four top automobile markets - Europe, North and South America and Asia.

But still, 67 percent of the two affiliates’ domestic production, or 2.34 million vehicles, is shipped overseas, indicating that they have good cause to be sensitive about the currency rate changes.

Experts say Hyundai faces a tough road ahead. According to a report by the Ulsan Development Institute on Tuesday, its auto exports shrink 1 percent for every 1 percent drop in the won-yen exchange rate.

“When there are little differences in prices, the competition boils down to brand value and product quality,” said Kim Hyun-chul, a professor at Seoul National University’s Graduate School of International Studies.

The weakening yen has already affected the market cap of Hyundai and Kia. This now stands at $65.3 billion, according to financial data that was released on Tuesday, meaning that they have now been overtaken by Honda ($67.8 billion). Toyota ranks as the global No. 1 with a value of $163.8 billion, followed by Germany’s Volkswagen with $106.6 billion.

Companies in other industries may also face a similar fate to Hyundai.

According to a report by Samsung Securities, as the Japanese yen depreciated to 110 yen against the greenback and the Korean won rise to 1,050 won against the U.S. currency, Korea’s top 25 listed companies will see their operating profits fall by 1.6 percent. They represent 44.6 percent of the total market cap on the Korean bourse.

According to a report by Hyundai Research Institute (HRI) last week, steel, petrochemical, machine tool industries will also feel the heat, followed by the IT, automobile and electronics industries.

“The report highlights how Korea is competing much more fiercely against Japan than China in the global market,” said Ju Won, a senior researcher at HRI.

“Exports by the electronics industry will not be heavily affected because Korean products are more competitive than Japanese ones these days.”