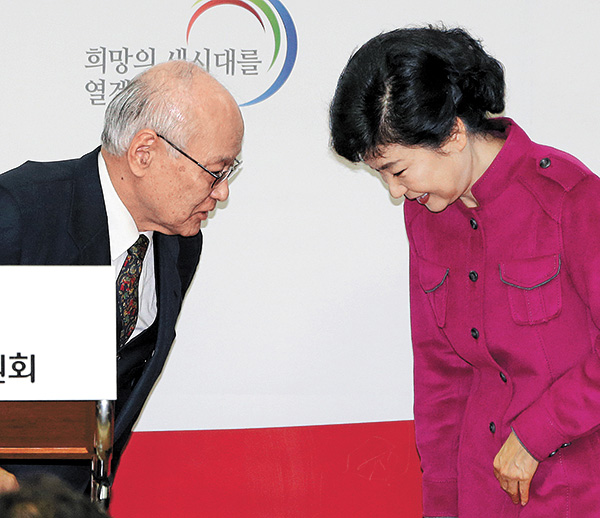 President-elect Park Geun-hye, right, talks with Kim Yong-joon, a former Constitutional Court chief who now heads her transition team, during a press conference in Seoul yesterday. Kim was nominated by Park as the first prime minister of her incoming administration. [Joint Press Corps]


“I believe Kim is the best person to re-establish the country’s rule of law and end the public distrust caused by a poor social safety net and open up a new era to protect the underprivileged in our society,” Park said in a press conference.

“Kim was a former chief justice of the Constitutional Court who spent his lifetime career as a judge with strong convictions and principles,” Park said.

“He also communicated thoroughly with members of the transition team on both large and small issues and led the committee pragmatically. If you look at his life, he always stood on the side of the weak and gave hope to the underprivileged.”

Park said the nomination was based on her faith in Kim’s abilities to understand and communicate well with the public.

Kim is the oldest prime minister nominee in history. He will have to go through a confirmation process by the National Assembly.

A native of Seoul, the 74-year-old former chief justice of the Constitutional Court was appointed chairman of Park’s transition committee shortly after her presidential victory in December.

He headed the Constitutional Court from 1994 to 2000 and worked as a lawyer until he joined Park’s presidential campaign in October as a co-chairman of her election committee.

Park’s choice of Kim is in line with her philosophy of upholding the rule of law and improving life for the underprivileged. Conspicuously missing from her announcement, however, were Park’s signature slogans of “grand national unity” and “empowerment of the prime minister.”

Speculation was high that Park’s first prime minister would be someone from the Jeolla provinces since she promised to end the deeply rooted regional divide in appointments.

Political observers also predicted that someone with long experience in government could be nominated because Park promised to devolve significant authority to the prime minister. 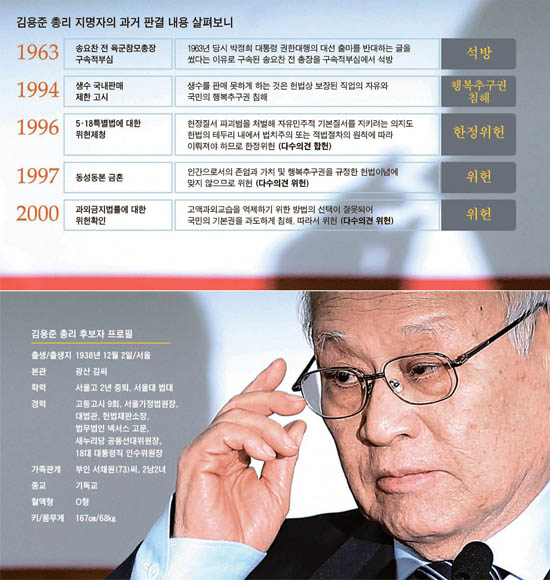 It was also expected that Park would find someone outside the transition team because she said earlier that the members of the committee won’t be guaranteed cabinet jobs. So Kim’s nomination came as a surprise.

Asked why he thought Park nominated him, Kim said, “I studied and handled the law for my entire life. Park thinks the society needs to restore the rule of law and I agree. I will work to realize that vision. It’s a separate matter whether I will become prime minister or not.”

Asked if he was confident he’d get through the grilling at his confirmation hearings, Kim said, “That’s not something I can say.”

The National Assembly has recently held tough confirmation hearings for Lee Dong-heub, President Lee Myung-bak’s nominee for chief justice of the Constitutional Court. The nomination was made with the agreement of the president-elect, which puts Park in the hot seat if Lee fails to be confirmed.

Kim also told reporters he had not thought about how he would split duties with the new deputy economic prime minister under Park.

“Kim is a great jurist and a respectable person who overcame physical disabilities and engaged in various social activities,” said Park Yong-jin, spokesman for the DUP. “But during the presidential campaign, Park promised to empower the prime minister to overcome the bad side of the imperial presidential system. We are doubtful if Kim has demonstrated any abilities to fulfill that role.”

The DUP spokesman said administrative experience and leadership to control ministries are prerequisites for a strong prime minister.

He said the opposition party will vet Kim thoroughly at the upcoming confirmation hearings.

Others in the DUP said Park made a safe choice but showed skepticism about Kim’s abilities.

“A stronger prime minister should have the will to correct the wrongful judgments of the president,” said Representative Lee Un-ju. “It’s necessary to vet him on that score.”

DUP lawmaker Park Beom-kye said he is worried about a looming security crisis. “I am concerned that he has no expertise in North Korea, foreign affairs and national security issues,” Park said. “Other members of the cabinet who can complement the prime minister should be appointed.”

“Kim is very respected in the legal community because he has strived to protect the values of the Constitution,” said Representative Lee Sang-il, spokesman for the ruling party. “We also see him as a person who can give hopes to the underprivileged with his life story of overcoming disability.”

Kim suffered from polio at the age of 3, but he overcame that to enter Seoul National University’s law department in 1954. He passed the bar exam in 1957 with a top score at the age of 19 and became the youngest judge in 1960.

After serving as a judge in various courts around the nation, he was appointed a Supreme Court justice in 1988 and retired from the post in 1994.

Two months later, then President Kim Young-sam brought him back by naming him chief justice of the Constitutional Court.