The conference room of the National Assembly, arranged for a meeting of a special committee to discuss the result of the confirmation hearing, is left vacant yesterday. Committee members failed to reach an agreement on whether they would approve the embattled nominee for the Constitutional Court chief justice, Lee Dong-heub. By Kim Kyung-bin

Ruling and opposition lawmakers failed to reach a decision on whether to approve the president’s nominee to the chief justice of the Constitutional Court, but instead pressured the embattled nominee to step down voluntarily.

The legislature’s special committee for the confirmation hearing canceled a meeting yesterday that was scheduled to take place where a ruling Saenuri Party representative and his counterpart from the main opposition Democratic United Party discussed whether Lee Dong-heub, the nominee for chief justice of the nation’s powerful court, is qualified for the position.

Under the current law, in order to appoint a Constitutional Court chief justice, a ministerial-level post, both ruling and opposition members should submit a report within three days after a confirmation hearing ends. 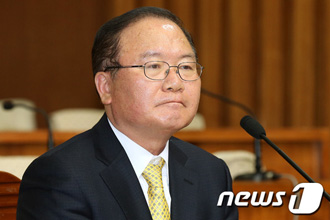 After that, the National Assembly speaker convenes a vote where more than half of the seating lawmakers have to vote in favor of the nomination for it to be approved.

While the DUP argued Lee is entirely unqualified for the post, some Saenuri members disagreed.

“The Saenuri Party claimed that the report should include opinions of both supporters who think Lee is qualified and the opponents who don’t,” Kweon Seong-dong, a Saenuri’s representative of the committee, said. “But the DUP insisted the reports should say Lee is unqualified only.”

“As they failed to reach an agreement, the activities of the committee have actually finished,” Kweon said, implying that there won’t be any further negotiation between the two parties over the matter.

“But there is actually political pressure on Lee - it would be better for him to show his sacrifice and dedication [to the country] by abandoning his candidacy.”

Lee, the 61-year-old former justice at the Constitutional Court, was hammered with questions during the two-day confirmation hearing, particularly by the DUP lawmakers, about whether he pocketed expense money from the court and skimped on air tickets to pocket the difference. Lee denied all allegations and he said that if it was true, he would step down.

Technically, the National Assembly speaker can exercise his right to hold a vote for the nomination, but in the midst of mounting public criticism against Lee, doing so could be a political burden to the speaker, observers say.

Saenuri Party members, who are worried that the troubled nominee could jeopardize President-elect Park Geun-hye’s creation of a cabinet, are ratcheting up pressure on Lee to resign.

Cho Hae-jin, a Saenuri lawmaker, yesterday suggested during a meeting that “Lee could make a bold decision” to step down, otherwise, President Lee “could withdraw his nomination, which is another option.”

In fact, in July, Kim Byung-hwa, a former Supreme Court nominee, also stepped down because the special committee failed to adopt a report. Kim was embroiled in allegations of tax evasion.

Nonetheless, the Saenuri Party still continued to attack the DUP. The ruling party sees the main opposition party as trying to avoid a legislative vote, because the ruling party members, who occupy more than half of the legislative seats, will definitely vote in favor of the nomination.

“If the opposition party members keep protesting all of the nominations [by the president], no conservative will be appointed,” Na Seong-lin, a Saenuri lawmaker, also added.