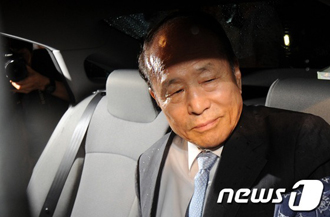 A Seoul court yesterday convicted the elder brother of President Lee Myung-bak for receiving bribes from savings banks and a conglomerate and ordered him to serve two years in prison.

Lee Sang-deuk, 77-year-old former lawmaker of the Saenuri Party, was indicted in July 2012 on charges of receiving 300 million won ($280,714) each from Solomon Savings Bank and Mirae Mutual Savings Bank ahead of the 2007 presidential election and another 150 million won from Kolon Group from 2007 to 2011.

After indicting the president’s brother, the prosecution asked the court on Jan. 10 to punish him with a three-year prison term and 757-million-won fine.

The court yesterday convicted Lee of most of the graft charges and handed down a two-year prison term and 757 million won fine.

Whether Lee would appeal the ruling or not has been at the center of public attention following media reports that he could be included on the list of President Lee’s special pardons next month.

Sources at the Blue House have said a plan to grant presidential pardons is being reviewed in time with the Lunar New Year on Feb. 10.

The president has the right to grant a special pardon without the National Assembly’s approval for those whose convictions are finalized. If Lee gives up on appeal, he could be eligible for the special pardon.

Lee’s lawyer, however, said yesterday that his client must appeal.

“I will meet with Lee tomorrow and make a decision,” he said.

Lee and the prosecution have seven days to file an appeal.

Throughout the trial, Lee had rejected the charges. Lee himself gave a closing argument and adamantly denied that he had received any money from the businessmen.

“I am in agony from despair, but I have never done anything shameful,” Lee said.

In the ruling yesterday, the court said it has no choice but to sternly punish Lee because he betrayed the people’s expectations and trust in him as a leader of the nation who served five terms as a legislator and a former National Assembly speaker.

Following the announcement of the sentence, Lee shed tears. He was sent immediately to jail from the courtroom.

On a separate but related case, the court also convicted Representative Chung Doo-un of the Saenuri Party on charges of receiving 140 million won from Mirae Mutual Savings Bank. Chung was also convicted as an accomplice of the presidential brother’s bribery case by introducing him to the chairman of the Solomon Savings Bank.

Chung was ordered to serve one year in prison and pay 140 million won in fines. The prosecution had earlier asked for an 18 month prison term and 140-million-won fine to punish Chung.

Chung’s conviction and sentencing, if finalized, is heavy enough to cost him his lawmaker seat.