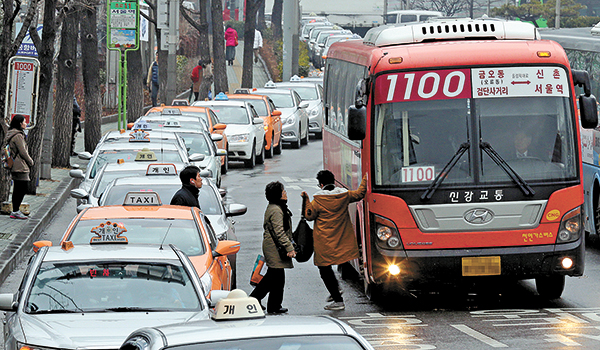 Citizens walk past lined-up taxis to catch a bus on Wednesday at a bus stop near Seoul Station. By Kim Seong-ryong

As the taxi industry is demanding the government designate taxis as mass transportation, they found that they have been carrying forward a series of projects that are poles apart from benefiting the public.

According to a document from the Korea National Joint Conference of Taxi Association, one of four leading groups in the taxi industry, they planned to oppose the government’s two main projects, which would provide more transportation service to the public as well as improve the taxi industry.

Opposing the government plan to expand school and commuting buses for students and workers is one of the goals the cabbies have targeted.

Stopping the new income management system for taxi companies, which would force cabbies to run their businesses more transparently, is the other.

The document clearly stated that the government’s plans must be destroyed as they don’t benefit the taxi companies.

The document was produced in December last year, days before the National Assembly passed the taxi bill. The JoongAng Ilbo exclusively obtained the documents on Wednesday.

Last year, the government carried out a plan to operate more buses for students and workers commuting to industrial complexes in rural areas by investing 4.5 billion won ($4.2 million).

The government had only been supporting school buses for child care service centers, kindergartens and public schools, but decided to support buses for hagwon (or private academies), which usually run classes until late in the evening.

It also planned to support chartered buses in order to help workers commuting from industrial complexes in rural areas. The plan was postponed as the government could not provide the necessary budget.

The taxi industry, however, thought this project could lower their income as they might lose some passengers.

“I know they are private businesses, but I can’t understand how much money can really satisfy them. They are about to receive an additional hundreds of billions of won in subsidies from the government if the taxi bill is approved later,” Cho Hee-sam, executive official from a chartered bus association said.

The taxi association also decided to protest against the government’s “car sharing”, or car pooling, that the Ministry of Knowledge Economy proposed.

The Knowledge Economy Ministry is running a carpool campaign that promotes electric cars as energy-saving vehicles, in an effort to encourage people to buy the cars then take their coworkers to work with them to show them how they work.

Currently, most taxi companies in the country demand taxi drivers give up a certain amount of their earnings every day and drivers keep the rest, but the system was often used as a method for evading taxes by taxi company owners. The average price a driver pays to a company is about 105,000 won ($98)a day, according to the taxi industry.

The government said the companies will be fined a maximum of 10 million won and a certain number of taxi licenses will be canceled if they violate the regulation.

But taxi companies have been ignoring it, claiming, “Our condition is too poor to follow the system.”

“If the government’s income management system is implemented, the income for taxi drivers will increase,” a spokesman for the taxi policy division from the Seoul Metropolitan Government said.

“It means the money that taxi companies must pay, including drivers’ insurance fees and severance pay, will increase as well. That is the reason why they are opposed to the plan.”

The bill, which is pending at the legislator, was proposed by the Ministry of Land, Transport and Maritime Affairs which wanted to protect taxi drivers from companies and prevent them from evading taxes.

“No matter what they are trying, we have already declared on Wednesday that we will submit the revised taxi law to the National Assembly by the end of March,” a spokesman for the Transport Ministry said.

It is the first timeline that the Transport Ministry has announced for the revised bill, the alternative plan to the National Assembly’s taxi plan that would provide 1.9 trillion won in state subsidies to the industry.

The revised law aimed to provide compensation to taxi companies in return for reducing the number of taxis and supporting necessary funds in constructing public taxi garages as well as improving the wage system for drivers.

It states that about 100 to 200 billion won will be needed per year for the plan.