Dancers in the street hoping for more hanbok

Dancers in the street hoping for more hanbok 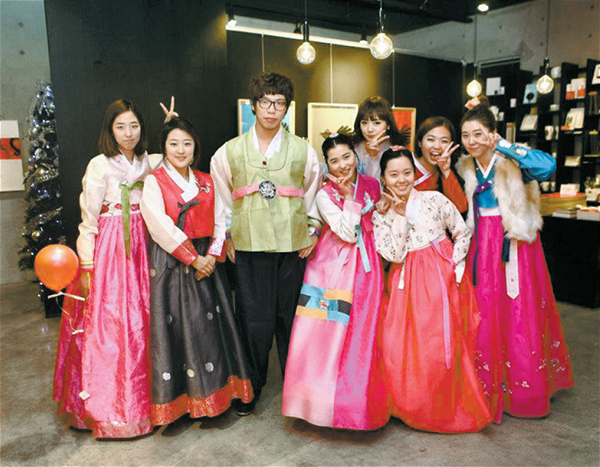 Members of Hanboknoledan, a group that promotes hanbok, Korean traditional clothing, pose for a photo at the Gahoe Gallery Cafe in central Seoul on Dec. 26 at their year-end party. Provided by Park Jae-wan


On Dec. 26, around 30 people in their 20s wearing hanbok, Korean traditional clothing, gathered together at a cafe in Gahoe-dong, central Seoul. They were not celebrating a late Christmas or an early New Year’s Day. And this wasn’t their first gathering.

These young Koreans were first spotted in Hongdae, a hub of nightlife in Seoul, in August 2010, wearing hanbok and dancing to music that definitely wasn’t hip-hop. They were spotted again in Yongsan Station, central Seoul, in August last year near the U.S. Army base, doing the same dance.

These young Koreans are members of Hanboknoledan, a nonprofit organization established in 2010 to “promote the country’s traditional clothes through unconventional approaches.”

Currently, Hanboknoledan has 110 official members and 1,200 online members. According to the group, its objective is to “break negative perceptions and prejudice toward Korean traditional clothing” and to “promote the practicality and beauty of hanbok.”

“Our goal is to popularize hanbok among all Koreans,” says Park Seon-young, 25, the leader of the group. “We want all young Koreans to feel the same sense of excitement when wearing hanbok that our ancestors did.”

Since August 2010, group members have performed flash mobs at various locations, including Incheon’s Songdo International Business District. The group was invited to the “I-Festival” held in Songdo and organized by the Incheon Metropolitan Government.

“As a performer, I was happy to introduce hanbok to foreigners who participated the festival,“ says Kim Jeong-myeong, 16, a freshman at Hankuk Academy of Foreign Studies.

Recently, Hanboknoledan has also released a theme song online in an effort to grab the attention of young Koreans. It also lends hanbok at affordable prices to the public.

The final goal of Hanboknoledan, according to Park, is to “provide an atmosphere where people can casually do their daily activities wearing hanbok as well as to develop exciting content.”

Park says the group is working on more projects. It is planning to hold an event with hanbok on Independence Day on March 1 and promote a “one-hanbok-for-one-person campaign,” which collects signatures from the public to encourage the wearing of hanbok on traditional holidays.

“We are also nearly finished establishing our Web site. When it’s completed, we are going to upload and distribute the HanNolZine, an online magazine that introduces our group and the hanbok itself,” Park says.

Park explains that the group will continue to “differentiate itself from previous ways of promoting hanbok both in and out of the country.”

“Many public and private organizations have been making efforts to globalize hanbok by emphasizing their ‘luxury’ aspects. However, we think differently. We try to construct a social atmosphere accessible to all generations, especially targeting the younger generation, which is relatively new to hanbok culture,” Park says.

“We would like to prepare a lot of fun events to help people enjoy hanbok culture. Hanbok should be the clothes that we wear when we want, not when we have to.”