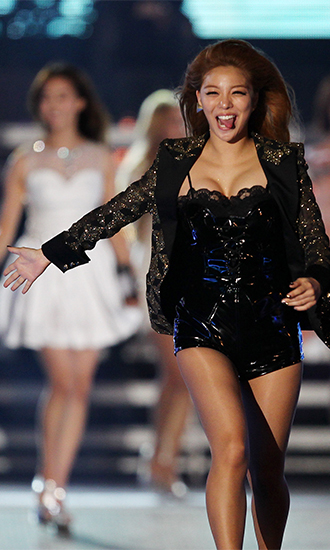 Rising star of K-pop, Ailee has been asked to attend the 55th Grammys to take place on Feb.10.

YMC Entertainment announced yesterday that the 23-year-old Korean-American singer has been invited as a VIP guest and will walk down the red carpet in Los Angeles with record producer and sound engineer Tony Maserati.
Ailee’s date for the night is nominated for the Best Engineered Album in the Non-Classical segment and has previously worked with the likes of Beyonce, Lady Gaga and Black Eyed Peas.

YMC also let it slip that Ailee will be performing for Grammy attendees and hall-of-famers at the Pre-Grammy Party to take place on Feb.7.
“The party will be hosted by Mnet America and Ailee will sing 2 or 3 songs in front of the biggest stars,” said the singer’s agency.
Meanwhile Mnet American confirmed the details and added that Ailee would also be given the “Rising Star” award by them.

Meanwhile the young entertainer herself said that she was so excited about the upcoming events.
“I’m counting down until the day,” said Ailee who said that next time she hopes to be nominated for an award by the famed music awards ceremony.