Kia earnings up 10% on foreign sales

Kia earnings up 10% on foreign sales 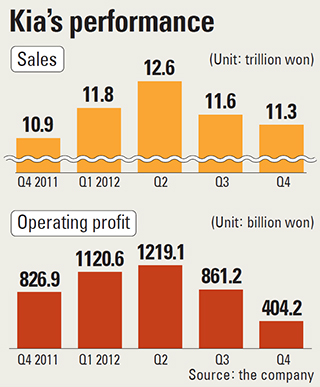 Kia Motors, the nation’s second-largest automaker, said yesterday that its 2012 earnings climbed 9.8 percent from a year earlier thanks to steady sales in overseas markets.

For the fourth quarter, Kia’s sales inched up 2.9 percent on-year to 11.3 trillion won, while operating profit plunged 51.1 percent to 404.2 billion won. Its net profit dipped 6.7 percent to 737.5 billion won over the October-December period.

“We expect the world’s car makers to continue to struggle in 2013, but we will redouble our efforts to raise our brand image and strengthen quality management to tide over the unfavorable environment,” said Kia Motors in a separate statement.

Kia Motors said its growth slowed down last year compared to a year earlier, due mainly to a strengthening won. Kia posted a 30 percent surge in net profit for 2011 and its sales jumped 20 percent on-year.

The carmaker also cited a supply shortage due to temporary production stoppages in the summer and the expansion of a local plant.

Its domestic sales shrank 2.2 percent on-year, while the country’s local market as a whole contracted 4.2 percent from a year earlier to 1.4 million vehicles due to low local demand.

Its production at its overseas plants jumped 18.2 percent to 1.1 million vehicles, while 1.6 million units were produced at its local plants.

Kia said it set a conservative sales target for 2013 due to a delayed recovery in the world economy and the weakening yen.