LG U+ to roll out first unlimited-data plans for LTE

LG U+ to roll out first unlimited-data plans for LTE 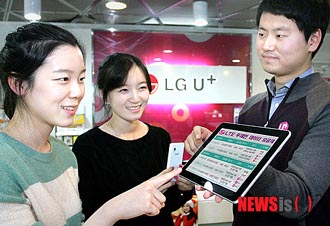 The company said it will kick off a temporary promotion seeking LTE subscribers who are interested in switching or subscribing to unlimited data plans from Jan. 31 to April 30.

Each unlimited plan allows subscribers to use 14 gigabytes, 20 gigabytes and 24 gigabytes of data,?respectively,?for free per month. Even after they use up all the data, they will be able to use up to 3 gigabytes of data for free each day, the company said.

“Even after a customer uses up their daily limit of 3 extra gigabytes, they can still use data free but the connection speed will be limited to two megabits per second,” LG U+ said in a statement. “Although this is slower than the LTE data connection speed, it’s faster than on 3G networks.”

Currently, the nation’s three mobile carriers including No. 1 player SK Telecom and No. 2 KT offer LTE networks that are five times faster than 3G networks, but neither offer unlimited data service to LTE subscribers.

According to the mobile carriers, a combined 15.89 million people subscribed to LTE services in 2012, up 13.4 percent from 2011. When counting LTE subscribers only, LG U+ is the No. 2 player after SK Telecom.

Regarding aggressive moves by LG U+, SK Telecom said it is looking into introducing its own unlimited-data plans.