Health forced her to retire...35 years ago

Health forced her to retire...35 years ago 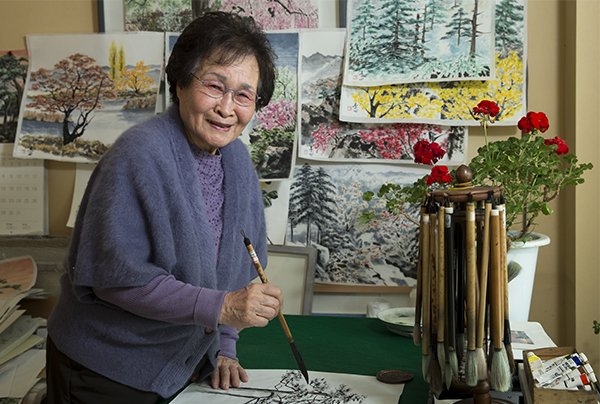 Kim Jeong-nyeo draws in a workroom in her home in Sangdo-dong, southwestern Seoul. The 90-year-old has taken to painting forest landscapes. [JoongAng Ilbo]


“I thought there wouldn’t be much I could do after the age of 50, but my old age is full of happiness thanks to drawing,” says former physician Kim Jeong-nyeo. “Living life doing what I love is such a blessing.”

A late bloomer, Kim reflected on how she started chapter two of her life, picking up a brush for the first time at age 55.

“A new door opened,” she says.

It’s been three years since she started making calendars with her drawings for her friends and acquaintances. For 2013, she made 300 calendars and they are all “out of stock.”

In 1978, Kim retired from her career as an obstetrician and took up art.

After 20 years, Kim closed her clinic in Yaksu-dong, central Seoul, and became a stay-at-home mom at her family’s Yeouido apartment for the first in her life.

“My parents always told me to become a professional woman and made me study, even though they lived during the Japanese colonization [1910-45].”

So she moved to Seoul all the way from her village in Hwanghae Province (North Korea), after elementary school.

Kim graduated from Kyungsung Women’s Medical College and managed a hospital while raising three sons and a daughter. All the while she continued her studies and obtained a doctorate degree. She was determined and pushed herself, but had to retire due to health problems.

“I was always tired and had no energy,” she says. “It took a long time to figure out I had renal tuberculosis.”

After retirement, she was bedridden for six months with a bad back. She had little going on at home because her late husband, Jeong Beom-seok (former president of Kookmin University), was always busy and her children were studying in the United States and France.

“Then I stumbled upon a flyer for an artist’s workshop in our neighborhood. They were recruiting students, and I registered because I wanted to do something.”

Since that day, drawing has been Kim’s avocation for 35 years.

“My drawing became better as I practiced. I didn’t feel time passing since drawing was so entertaining and I was so immersed,” she says. “I liked the beautiful color of paintings and was attracted to thick and thin ink lines in black-and-white drawings. So you could say I found joy in all genres.”

Kim has published two art books, and in 2002 had a private exhibition in Baegak Art Space in Insa-dong. Every Wednesday, she takes a lesson from Korean painter Woo Jae-gyeong.

“I used to draw five hours a day when I was in my 80s, but now I can’t draw any longer than four hours. I always observe things around me very carefully and think about what I should draw next.”

Kim is so fit and active that it’s hard to believe she had to retire because of her health. She says she got healthy thanks to drawing and swimming.

“I started swimming shortly after I started drawing. I swam for more than 20 years, but stopped 10 years ago. So these days I have no more secrets for a healthy life except eating little,” she says.

She may not have any big secret to health, but the 90-year-old is still able to draw sitting straight up.

Since she is busy with her work, there is no time to be a “picky, reprimanding mother-in-law.” All four of her children have doctorates.

When Kim wrote her pen name “Sojeon” (which means the original state of a field) on one of her pieces, the brush stroke was firm and the handwriting exceptional. “I guess I’m just lucky,” she says.