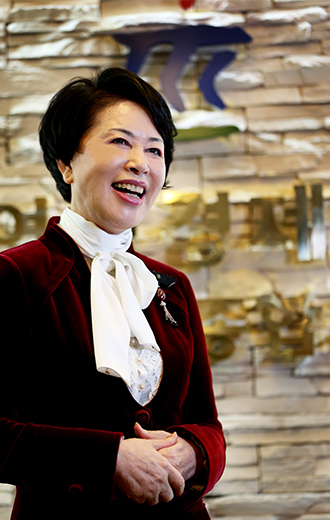 Lee Min-jai had been a homemaker for 18 years when she embarked on a trade business in 1987. Twenty-six years later, the 69-year-old Lee heads the Korean Women Entrepreneurs Association.

Lee, CEO of the newly named M.Son that generates annual revenue of 30 billion won ($28 million), will serve a three-year term as chairwoman.

Lee said she has high expectations for incoming President-elect Park Geun-hye. “I highly welcome the female presidency of Park and look forward to meeting her with other female entrepreneurs.”

She suggests that the incoming government take better advantage of an underused economic resource: women.

“Though it is true increasing numbers of women are landing jobs, there is still a considerable glass ceiling for women in business,” she said.

Lee added that the next engines of growth such as the biotech and medical industries will require more than ever the “talents of women, especially their exceptional observational skills.”

The newly appointed chairwoman urged the government to act to break that ceiling.

“Regulations that require state-run institutions to use products assembled by woman-managed firms could be a good first step [to promote female entrepreneurship],” she said.

Lee also notes that entrepreneurs must win “trust” to succeed.

“At the beginning of my business career, I was tasked with importing special paper for currency notes from Britain at the request of the Korea Minting and Security Printing Corporation,” she said. “Given that the trade was related to sensitive currency manufacturing, the firm strictly wished us to keep the business secret and between us, which of course I did.”

When asked about today’s tight job market, Lee advised young people to “discover what they are good at” rather than merely “following what others do.”

“Thorough preparation is an essential key to success,” Lee emphasized.

“When I was getting ready to start my own business, many people recommended that I start a sewing business, which I thought was already in decline,” recalled Lee.

“As I decided to set up a trade business, I made myself a promise that I would not import products that could be manufactured in Korea, which to this day I have kept.”