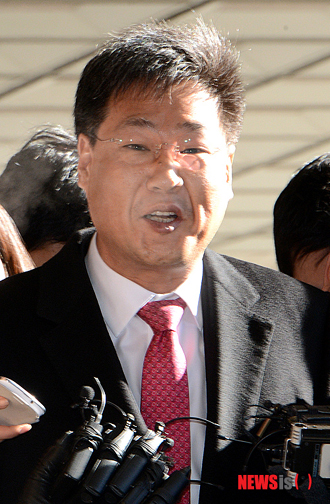 A ruling party lawmaker was questioned by prosecutors yesterday about his claim that late President Roh Moo-hyun made remarks undermining the legitimacy of the western sea border during a 2007 inter-Korean summit meeting.

In a parliamentary audit last October, Rep. Chung Moon-hun said that he read the National Intelligence Service’s classified documents on the conversation between Roh and late North Korean leader Kim Jong-il during the meeting in Pyongyang six years ago.

Chung argued that Roh told the North’s leader that Seoul would not insist on the Yellow Sea border, called the Northern Limit Line, which Pyongyang refuses to recognize as a legitimate maritime border.

In response, Chung filed his own libel suit against then-DUP Chairman Lee Hae-chan.

To confirm the contents of the transcripts, prosecutors recently looked at an abstract of the NIS classified transcripts, after concluding they were public records.

“[Suspicions] turned out to be the truth,” Chung told reporters before entering the Seoul Central District Prosecutors’ Office around 11:00 a.m.

The lawmaker also said the transcripts should be opened to the public in the interest of the people’s right to know.

Prosecutors said they will soon summon Rep. Lee Cheol-woo as well as Saenuri spokesman Park Sun-kyoo to determine if charges will be filed.

North Korea has never recognized the NLL, which was unilaterally drawn by the U.S.-led United Nations Command at the end of the 1950-53 Korean War.