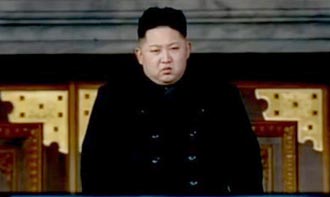 North Korea threatened Seoul with “physical countermeasures” if it takes direct part in new sanctions levied on the communist regime by the UN Security Council this week.

And it reiterated that it is calling off any talks to wind down its nuclear weapons program.

“From now on, there will no longer be denuclearization talks between North and South Korea,” said the Committee for the Peaceful Reunification of the Fatherland, a propaganda mouthpiece, in a statement carried by the Korean Central News Agency yesterday.

“We proclaim a complete calling off of the Joint Declaration on Denuclearization of the Korean Peninsula adopted [by the two Koreas] in 1992. [We] proclaim [the joint declaration] completely invalid.”

The regime also warned Seoul it will take “strong physical counter-measures” if South Korea takes part in the sanctions. It said that imposing sanctions is like “declaring war.”

Hours after the announcement of the resolution in New York, North Korea’s Ministry of Foreign Affairs issued a statement saying that it will take “physical actions” to strengthen its military capabilities. On the following day, the North’s National Defense Commission, its top military decision-making body, said it will carry out a “higher-level” nuclear test. Pyongyang has conducted nuclear tests in 2006 and 2009. The defense commission also threatened Washington, saying rocket and nuclear tests will “target the U.S.”

The U.S. Department of the Treasury and Department of State on Thursday added more individuals and entities linked to Pyongyang’s weapons of mass destruction program to their blacklist.

According to the Treasury Department Web site, two North Korean officials - Ra Kyong-su, Beijing representative of the Tanchon Commercial Bank, and Kim Kwang-il, the bank’s deputy representative - have been included on the sanctions list along with a Hong Kong-based trading company called Leader International Trading Limited.

The State Department added one entity and two individuals tied to proliferation activities: the Korean Committee for Space Technology and Paek Chang-ho, head of the satellite control center for the committee, and Chang Myong-chin, head of the Sohae Satellite Launching Station.

“The North should not carry out a nuclear test,” said a senior official at Seoul’s Foreign Ministry.