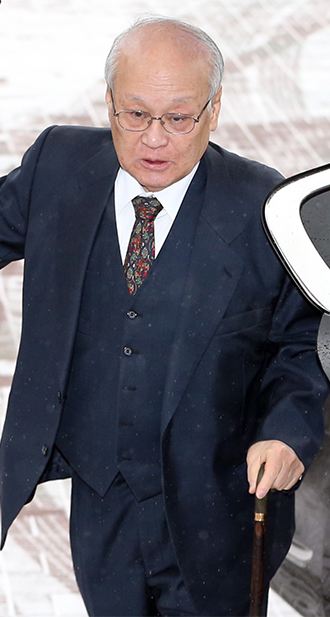 Kim Yong-joon, head of the presidential transition team and President-elect Park Geun-hye’s nominee to become prime minister, is being accused of fiddling with inheritance taxes and other ethical lapses.

Kim’s two sons were found to have been exempted from military service, one for being underweight and the other for having gout.

Opposition lawmakers are expected to question Kim on the alleged lapses in a parliamentary confirmation hearing next month.

According to National Tax Service data and records secured by the JoongAng Ilbo yesterday, the two sons of the 75-year-old Kim owned two real estate properties, one house and a large plot of land, worth a total of more than 2 billion won ($1.86 million) in 1993.

The suspicion is that Kim transferred ownership of the properties to his sons to avoid inheritance taxes.

In 1993, in disclosing his assets as a Supreme Court justice, Kim said his four-member family, including his wife and two sons, owned 2.99 billion won worth of property.

That amount was the highest among the 14 court justices at the time. Most of the property was owned by his two sons.

“We assume that the real estate under his sons’ names was purchased using his own money.”

The official said that at the time it was an obligation to pay inheritance tax when giving assets to children, and “if Kim did not pay it, it would clearly be an act of irregular wealth inheritance.”

Ever since Park announced the nomination of Kim Thursday, questions have been raised as to whether he was sufficiently vetted. The nomination was wrapped in secrecy until it was announced.

Cho Yoon-sun, Park’s spokeswoman, told reporters that she was also unaware of the nomination until 30 seconds before the announcement was made by Park.

“In general, a verification team receives around 10 reports from various agencies,” said an official from the transition team. “That process wouldn’t have been an exception for Kim.”

An official close to Park said, “I’m aware that the verification team has already confirmed that it isn’t much of a problem. The only thing the team would have to do is review Kim’s real estate registration book.”

The opposition Democratic Untied Party jumped on the allegations.

“This kind of problem was inevitable considering President-elect Park’s secrecy in appointing officials,” said DUP Representative Park Nam-choon. “It happened in the nomination of Lee Dong-heub [for chief justice of the Constitutional Court].

Park will nominate senior secretaries for the presidential office and Cabinet ministers before her inauguration on Feb. 25.

Although a specific date hasn’t been set for Kim’s confirmation hearing, it is most likely to be before the Lunar New Year holiday on Feb. 10.