The Seoul Metropolitan Rapid Transit Corporation, which runs subway lines No. 5, 6, 7 and 8, has begun distributing a free guide book in three languages to help foreigners get around on their lines in the capital city.

The 32-page guide book, produced in English, Japanese and Chinese, describes eight recommended tours as well as accommodations, restaurants and shopping centers that have attracted high numbers of international tourists in recent years.

The Transit Corporation said yesterday they produced 50,000 copies of the guide and begun distributing them at information centers in 44 subway stations used by foreigners including Itaewon Station on line No. 6 and Gwanghwamun Station on line No. 5 starting yesterday. The Transit Coporation said it will send 10,000 copies to Japan later in the month to be distributed in Tokyo Station. 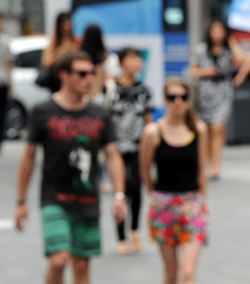 The eight recommended tours follow different themes. Tour No. 1, for example, gives visitors a taste of Korean traditional culture and goes from Jongno 3-ga station to Anguk and Gyeongbokgung stations on line No. 3 and includes the antique shops and art galleries of Insa-dong, central Seoul.

The guide has instructions on how to use subway ticket machines and T-money transportation cards and includes some helpful numbers for foreigners such as Dasan Call Center Number (120) and Tour Information Center (1330), which give advice in English, Japanese and Chinese.

“We hope the subway guides help both foreign visitors and residents use the city’s subways,” said Kim Ki-chun, Chairman of the Seoul Metropolitan Rapid Transit Corporation, in a press release.