Ryu gets first taste of life as a Dodger

Ryu gets first taste of life as a Dodger 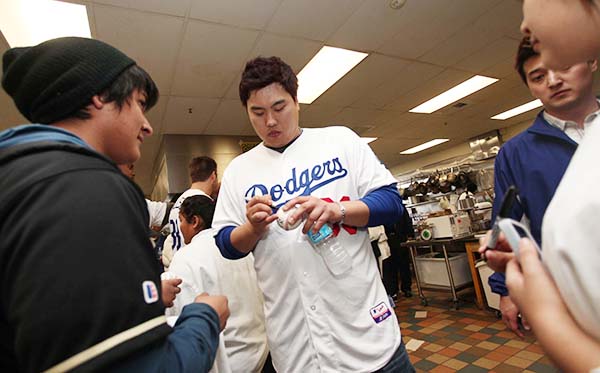 Korean pitcher Ryu Hyun-jin signs an autograph for a fan Friday as he started his official schedule as a Dodger. By Kim Sang-jin

LOS ANGELES -Coaches and players expressed high expectations for Ryu Hyun-jin as the 25-year-old Korean began his official schedule as a Los Angeles Dodger on Friday.

Ryu, who arrived in Los Angeles on Wednesday, joined Dodgers manager Don Mattingly and 14 other players on the final day of the team’s annual weeklong community charity event, “Pitching in the Community,” held in various locations in the city.

Asked about Ryu, Mattingly said he is the “whole package,” equipped with control and speed, who he hopes will be a magnet for Korean fans in Southern California.

Shortstop Luis Cruz, one of the participants Friday, said it was an excellent decision to bring in Ryu and he wants to win the World Series ring with the Korean pitcher. Ryu signed a six-year, $35 million contract last month.

Clayton Kershaw, another left-hander who was the Dodgers’ No. 1 starter last year, said he heard Ryu is a good player and is looking forward to playing with him.

Kenley Jansen, a relief pitcher from the Netherlands who has played with the Dodgers since 2010, was also there. Jansen, 25, said Ryu is already the best pitcher in Korea so he should be well-prepared to succeed in the Major Leagues, adding that Ryu should be able to handle the pressure.

First baseman Adrian Gonzalez advised Ryu to keep he focus on himself, rather than what others are saying or doing.

“I saw them (teammates) for the first time, and they were all friendly to me,” Ryu said.

“I will try to get as good a teammate as I can.”

The community event started with pizza-cooking by the players at the Santee Educational Complex in south Los Angeles. Ryu made pizzas with ease, and the Dodgers said on the team Web site that he “appeared very familiar” with it.

Also on the agenda Friday was helping young students with their art projects and an instructional clinic.

“I am very happy to be able to attend this meaningful occasion,” Ryu said, expressing his hope that similar community events might be held in Korea so fans can get to know the players

Ryu, whose goal is to be the first Major League Rookie of the Year from Korea, said he already feels at home in the blue Dodger uniform, as it is similar to the uniform of the Korean national team.

Ryu, who went 98-52 in seven seasons in the Korea Baseball Organization, led Korea to the gold medal in the 2008 Beijing Olympics. He also pitched during the 2009 World Baseball Classic, when Korea finished second to Japan.

Dodgers pitchers and catchers will report to spring training Feb. 12 at Camelback Ranch in Arizona. Ryu said he plans to leave for Arizona on Friday.

“As there are more games in the Major Leagues than in Korea and the schedules here involve more traveling, I will be more careful in physical training,” Ryu said.