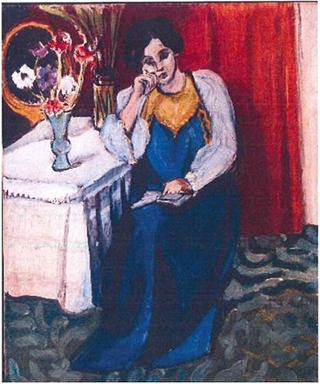 Henri Matisse’s 1919 “Reading Girl in White and Yellow” was among the seven paintings stolen from a Rotterdam museum. [JoongAng Ilbo]

BUCHAREST - Three Romanians arrested last week in connection with the theft of seven masterpieces from a Rotterdam museum, including works by Monet and Picasso, claimed they were innocent in court Friday.

The men, charged with conspiracy and aggravated theft, have been linked to at least two of the artworks - a Matisse and a Gauguin - which they allegedly tried to sell in Romania.

Their lawyers told the court they were innocent even though one of them twice visited the museum where the seven masterpieces, with a total value estimated at between 100 and 200 million euros ($135 million and $270 million), were stolen. However, the court denied the suspects bail.

Eugen Darie, dressed in sweatpants and anorak, told the court he visited Rotterdam Kunsthall museum about the time of the theft last October but never laid eyes on the stolen paintings he and his co-defendants allegedly tried to sell.

“I didn’t see the paintings,” he said. “I only looked at bronze statues. I am innocent.”

Fellow suspect Radu Dogaru also told the court he had nothing to do with the heist, one of the most spectacular in the art world in the past 20 years, even though prosecutors say he was present when two of the works were offered to a Romanian businessman in the presence of an art expert.

Mihai Alexandru Bitu, the third suspect, also denied involvement. His lawyer, Daniela Dede, said her client “just received a call from his co-defendant Dogaru who asked him to find a buyer for some objects. He didn’t know it was these paintings.”

The suspects, all in their 20s, have been detained for questioning since their arrest last Tuesday. Under Romanian law, they can be held for 29 days.

All three have been under investigation for violent offenses in the past.

Romania’s police chief Petre Toba said Thursday that investigators had evidence leading them to believe several other people had taken part in the theft. A person from Moldova is said to have been present when the paintings were offered for sale, said one of the defense lawyers. Investigators also believe that an Albanian man investigated for murder in Romania may have helped the suspects in the Netherlands, sources close from the investigation told Mediafax news agency.

The heist gripped the Netherlands and the art world as police apparently struggled to piece together the crime, despite putting 25 officers on the case. The works stolen include Picasso’s “Tete d’Arlequin” and Matisse’s “Reading Girl in White and Yellow.” AFP