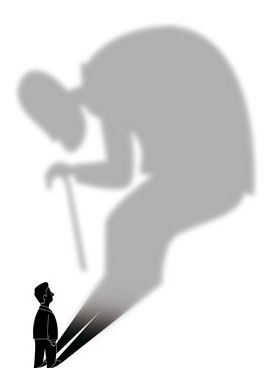 More Koreans are now subscribing to insurance policies that provide payments until they are 110, as they are concerned about living longer than expected without sufficient savings.

Lee Ki-youl, 54, recently signed up for an insurance policy that provides nursing services until he is 110. “I don’t know if I can live until that age. I just want to make sure I can support - and enjoy - myself if I survive that long,” he said.

Lee said many of his acquaintances are changing their current policies that run out when they hit 80 to longer ones that guarantee benefits for an additional 30 years.

Although the elderly over 100 account for 0.0024 percent of the population, people are increasingly becoming aware of the so-called “100-year-old era,” and starting to prepare ahead of time. Until 2012, the total number of the elderly population over 100 stood at 1,201.

At present, there are not many seniors who hold private life insurance policies. Only 19 of Samsung Life Insurance’s 8 million customers are older than 100.

Despite the small size of this demographic, the industry is seeing a new trend of developing insurance plans for longer life.

Hyundai Marine & Fire Insurance launched its Perfect N Comprehensive Insurance package last April, which added another 10 years to its longest policy. Subscribers can enjoy 54 types of benefits including nursing care until they are 100. It was the first insurance product to provide such coverage into extreme old age in the country.

Dongbu Fire Insurance followed its lead in August as it also extended the age at which its Family Life Silver Plan matures. Hanwha General Insurance introduced a plan that covers medical, driving and some other costs for all family members of a subscriber until the signatory reaches 110.

“The number of old people who die alone after suffering from critical diseases has risen recently,” said Han Ki-hyuk, a researcher at LIG Non-life Insurance. “Local companies are developing products that meet the needs of customers who expect to live a longer life in a fast-aging society.”

Such products are gaining popularity as one in 10 people now choose ones that provide longer coverage.

According to Hyundai Marine, from April to November last year, 23,575 people subscribed to its insurance plan that covers them until they reach 110.

“In proportion to the small population of elderly aged over 100, the number of new subscribers to the plan is quite significant,” said a spokesman at the company.

Experts say living until 110 is increasingly realistic. According to the Korea Council of Economic, Humanities and Social Sciences, the average lifespan will soon climb to 90. Korea is forecast to enter the “100-year-old era” by 2020.

“There are two basic choices after you retire: Dying with some savings left and trying to survive without any savings,” said Kim Kyung-rok, a researcher at Mirae Asset’s research center for retirement. “Most people are afraid of the latter.”

“There is a high chance Korea will become Japan, where the population of seniors over 100 hovers around 50,000,” Kim added. “Koreans are getting worried about this as they know Korea is a rapidly aging society, and this has spurred the new trend in the insurance market.”

“Insurance companies are hunting for subscribers by extending the longevity of their existing customers; insurance plans and raising premiums,” said a local consumer agency. “They are using people’s qualms about the future to turn a profit.”