Despite distractions, Azarenka beats Li to defend her title

Despite distractions, Azarenka beats Li to defend her title 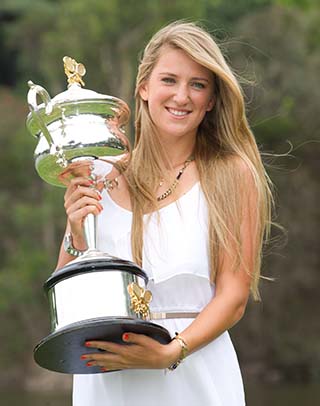 MELBOURNE, Australia - Victoria Azarenka had the bulk of the crowd against her. The fireworks were fizzling out, and when she looked over the net she saw Li Na crashing to the court and almost knocking herself out.

Considering the cascading criticism she’d encountered after her previous win, Azarenka didn’t need the focus of the Australian Open final to be on another medical timeout.

So after defending her title with a 4-6, 6-4, 6-3 victory over the sixth-seeded Li in one of the most unusual finals ever at Melbourne Park, Azarenka understandably dropped her racket and cried tears of relief late Saturday.

She heaved as she sobbed into a towel beside the court, before regaining her composure to collect the trophy.

“It isn’t easy, that’s for sure, but I knew what I had to do,” said the 23-year-old Belarusian. “I had to stay calm. I had to stay positive. I just had to deal with the things that came onto me.”

There were a lot of those things squeezed into the two-hour, 40-minute match. Li, who was playing her second Australian Open final in three years, twisted her ankle and tumbled to the court in the second and third sets.

The second time was on the point immediately after a 10-minute delay for Australia Day fireworks - a familiar fixture in downtown Melbourne on Saturday, but not usually coinciding with a final.

Li had been sitting in her chair during the break, while Azarenka jogged and swung her racket around before leaving the court to rub some liniment into her legs to keep warm.

The 30-year-old Chinese player had tumbled to the court after twisting her left ankle and had it taped in the fifth game of the second set. Immediately after the fireworks ceased, she twisted the ankle again, fell and hit the back of her head on the court.

The 2011 French Open champion was treated immediately by a tournament doctor and assessed for a concussion in another medical timeout.

Azarenka had generated some bad PR by taking a medical timeout after wasting five match points on her own serve in her semifinal win over American teenager Sloane Stephens on Thursday.

She was accused of gamesmanship and manipulating the rules to get time to regain her composure against Stephens, but defended herself by saying she actually was having difficulty breathing because of a rib injury.

Saturday’s match contained plenty of nervy moments and tension, and 16 service breaks - nine for Li. But it also produced plenty of winners and bravery on big points.

Azarenka will retain the No. 1 ranking she’s mostly held since her first Grand Slam win in Melbourne last year.

Li moved into the top five and is heartened by a recent trend of Australian runners-up winning the French Open. She accomplished that in 2011, as did Ana Ivanovic (2008) and Maria Sharapova (2012). AP